Casita Andina is a Peruvian fusion restaurant in London, and the newest from Martin Morales and the Ceviche team.

I was so lucky to be able to visit Casita Andina in its opening month and as a bonus they were even offering 50% off at lunch. Almost all of the dishes are gluten-free and a lot are vegan, so it’s a great place if you have any dietary requirements! They also change their menu with the seasons, so although a lot of the items below are still available now, some unfortunately are not. They also promote themselves as having high standards when sourcing their ingredients and if you want to read more, have a look at the bottom of the menus here.

I just want to say that the pictures ahead do not do the restaurant justice. My camera’s focus broke whilst I was in England and I had to use my old phone for photos, which as you know is not ideal in lower light!

The restaurant is promoted as a ‘picanteria’ style restaurant. A picanteria is a traditional, family style Peruvian restaurant normally inside somebody’s house in the Andes. Although this is a very modernised version, Casita Andina is indeed located inside a building that was once a house. I did find that the decor was so reminiscent of eating inside someone’s home, as it is full of photographs and Peruvian nick-nacks, and the intimate dining areas and narrow staircase between floors really emphasise that feeling.

Their food, however, is only based in tradition and these dishes have been modernised along with the location. If you want to find out more about the history of the location and the inspiration behind the restaurant, have a read of Martin’s explanation here.

We started with a couple of cocktails; the Black Butterfly (£8.50) and Pacha (£8 – clearly they named this after my gorgeous dog…maybe). The Black Butterfly would be my pick of the two as it was so dreamy, made with Lavender infused pisco, blueberries and wild nettle cordial.

We paired these with a couple of the snacks; the ‘Cancha’ (my favourite snack of fried Peruvian corn – £2) and the ‘Croquetas’ (pork and liver croquettes with a chilli jam – £4.50 for 4), which were perfect cocktail nibbles and left us excited as to what was to come.

To start we wanted something cooling so we went for the ‘Trout Tiradito’.

This was by far one of the most beautiful tiradito I have ever seen (check out my post on Lima Fitzrovia for an equally amazing looking ceviche). The colours were so vibrant, with the pink of the trout, the yellow from the chilli and the purple of the potato literally giving you summer on a plate. It was delicious and the mix of flavours and textures were just as beautiful as the presentation.

We also tried the ‘Causa Andina’ (£5.50 – which I don’t have a photo of), which was a somewhat deconstructed and fine dining version of a causa, without the meat. It looked nothing like a traditional causa (check out Tanta’s version here), although it was still a perfect dish for summer. Mashed purple potato created the base of the causa, and was topped with finely chopped vegetables and onion. Fine strips of asparagus were placed on top, and a drizzle of lime dressing around the edge. It’s unlike any causa I have ever seen, but nonetheless it tasted delicious and was perfect for the warm August weather.

Next up, we tried two of the hot dishes. Firstly the ‘Aji de Gallina’ (£9), which translated means chilli hen/chicken, but to break it down, it’s shredded chicken in a sauce made with yellow chilli, cheese, cream/milk and bread. It’s one of my all time favourite dishes here in Peru, and I’m used to it coming in a huge portion served with potatoes or rice (or both) and then traditionally topped with a hard boiled egg and olive. 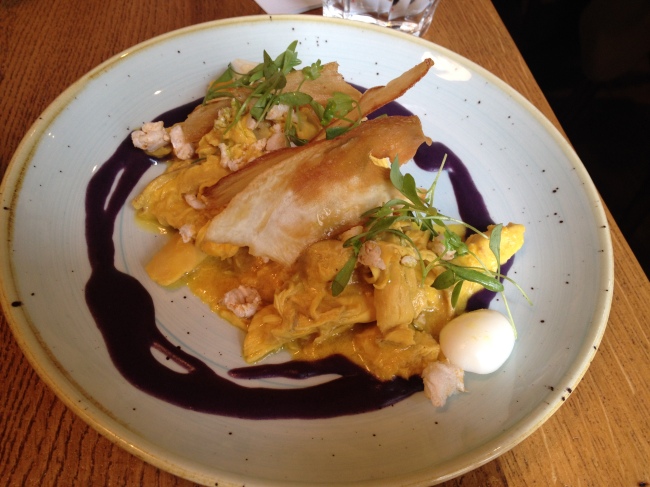 As you can see, it looks pretty different in this presentation, and it was gorgeous. It was creamy and flavourful and almost all the elements of the traditional dish were there in some way. The usual hard boiled egg was swapped for a quails egg, the olive was exchanged for an olive sauce drizzled around the edge. Instead of rice, there were little rice puffs, and instead of potato, the dish was topped with fried yucca (cassava) crisps. 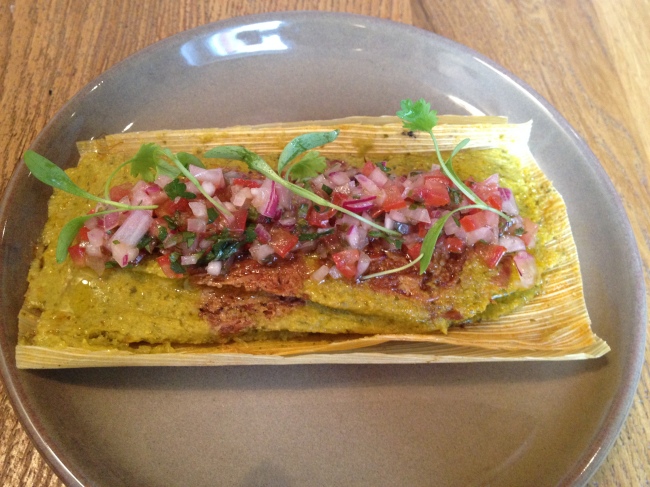 Mashed corn shaped by and cooked inside its own husk and filled with pork, and topped with a finely chopped salsa (onion, tomato, coriander). This is something you find all over Peru and it really was extremely authentic. Nothing changed, super traditional and beautifully presented.

Having seen the desserts on the next table we were ready to move on to something sweet. I had seen online that they offered a chocolate & sauco (elderberry) dessert, but only for dinner, however the waiter managed to work his magic so I could try it for lunch instead! 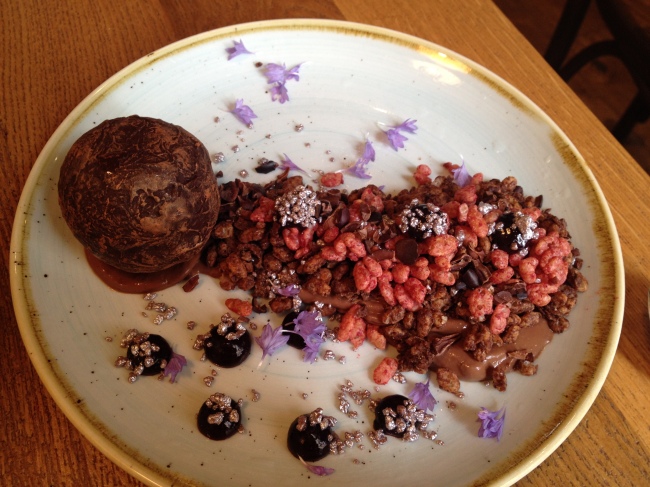 It was so worth it. A sphere of Peruvian chocolate, served with some spots of thick sauco sauce, chocolate puffed rice, chocolate sauce, silver rocks of popping candy, and a sprinkle of purple flower petals. It was one of the most stunning desserts and the flavour exceeded even the presentation. The combination of chocolate and sauco was gorgeous, plus the popping candy and the coco puffs made for a fun side to the dish.

We also ordered the avocado and strawberry dessert, that was the epitome of a summer special.

The freshness of this dessert gave us the perfect balance to the richness of the chocolate dessert we had just eaten. The avocado mousse was cool and creamy against the sweet tang of the strawberry sauce and the pure sweetness of the meringue, which made for a delicious dish and one I could have eaten about three of.

I highly recommend making a visit to this little spot in the heart of Soho. Take a break from the shopping on Oxford Street and Regent Street, or have an early dinner before the theatre.  The small plates mean that you can pretty much share your way through the entire menu and taste a little of everything. They also have a bar downstairs where you could even just grab a pisco sour, a cocktail or their Somos Libres beer brewed especially for them. Pull up a chair and make yourself at home at the Little Andean House.