It’s a real thing. I promise. 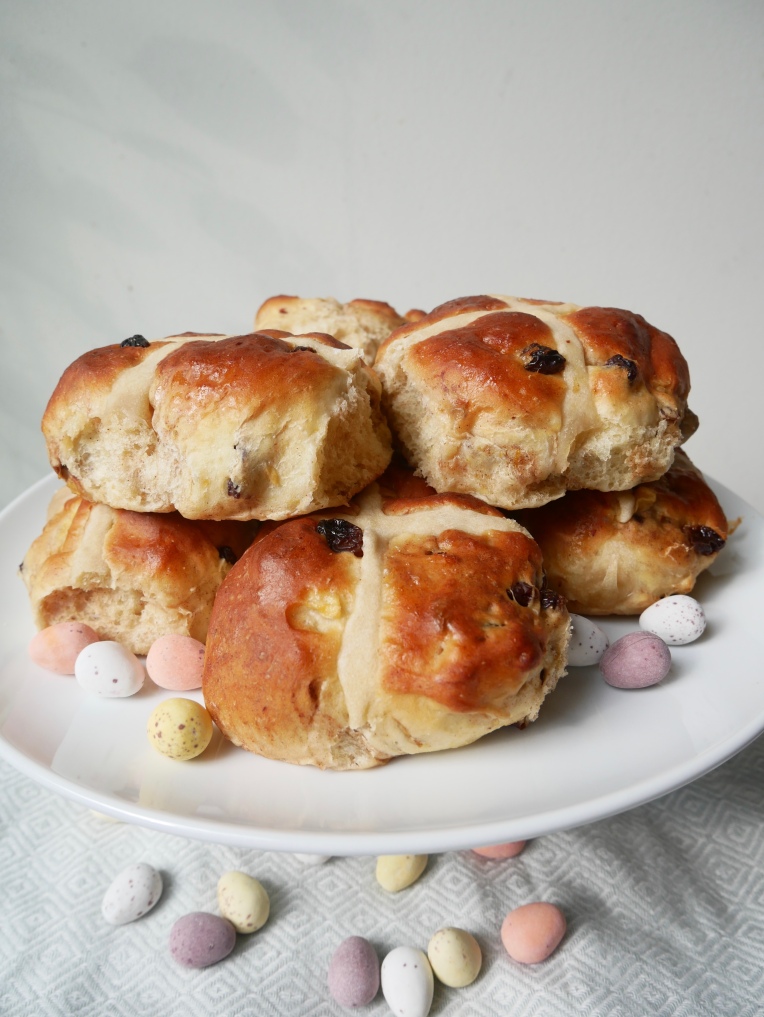 I literally cannot go an Easter without eating this beautiful invention. In Peru, you cannot find hot cross buns (along with Cadbury’s creme eggs and mini eggs), which makes me unbelievably sad, so I have my mum either bring them to me in Lima when she comes to visit or freeze them until I go home later in the year. The problem is real.

Last year I found that a bakery in Lima was making them, but honestly they were ridiculously expensive and they were nothing to write home about (way too tough and chewy). This year however, I decided to be brave, put on my bread baking hat, and make them myself.

This was the best decision I ever made.

The main reason that I hadn’t made them before was the whole bread flour issue. The supermarkets here in Lima don’t sell it, and I sure as hell had no idea where to find it. Luckily, last year I found out that I could pick it up in La P’tite France bakery by the kilo, so I did just that and waited for the perfect recipe. Hot cross buns was totally the one for me!

Now, if you live outside the UK and Australasia you might not be familiar with a hot cross bun, but it’s basically a sweet bread made from enriched dough filled with sultanas or raisins, mixed peel, orange zest and cinnamon. It’s kind of like Christmas except at another time of year. Basically it’s just the best. 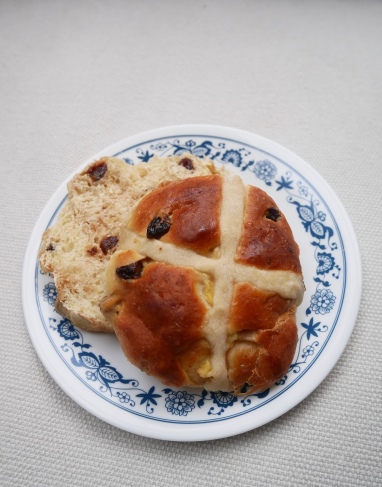 There are a million varieties on this recipe though; blueberry filled, chocolate and orange, chocolate chip, maple….the list is endless. I, myself, love me an OG classic.

I honestly cannot tell you how proud I am of my gorgeous little (they were actually huge) buns. They are completely homemade to look at, i.e. they’re not perfectly rotund, but inside tells another story. The texture of the bread was just as perfect as any other bakery in England. It wasn’t doughy, there were little air pockets, it was cooked to perfection on top and bottom, and I literally had the biggest grin on my face the entire time I was eating it.

I took the recipe from Paul Hollywood‘s book ‘How to Bake‘ and I didn’t mess around with it. This was my first attempt, so I needed to follow the recipe as exactly as I could so I had the best chance of success. However, there were some adjustments that needed to be made due to climate issues and availability issues. We are very humid here in Lima, so the dough gets stickier far quicker, therefore less liquid is needed and much more flour is required when kneading. I genuinely have no idea how much more flour I used but it was a fair amount, although I started with the stated amount when making the dough and only sprinkled more in as I saw fit when I started to bring it all together. The other problem is mixed peel. That’s not a thing here, well, not that I could find, so I just missed it out. This recipe includes orange zest and chunks of apple, so I figured it wouldn’t be missed. I wasn’t about to make my own of that too! If you can find it, do use it though!

If there are any tips I can give to people who are making it in a humid country, I’ll pop them down as I go.

I know it’s Easter today, so this recipe might seem a little delayed, but really, I would happily eat these any time of the year. In the UK, it’s a holiday on Monday, so if you live there then whip up a batch and pretend like work isn’t fast approaching. Hot cross buns are the best medicine for that kind of thing.

500g strong white bread flour (DO NOT USE PLAIN FLOUR), plus extra for dusting – (humid countries – make sure you have at least 200g extra, just in case you need it)

120ml cool water – (humid countries – I only used half of this amount in my attempt, so be careful to only add a bit at a time!)

150g sultanas – I chopped mine in half, as I’ve noticed they tend to puff up and explode sometimes if left whole! (Peru – I used raisins, as I don’t think we have sultanas here and golden raisins are more expensive)

80g chopped mixed peel – (Peru – I didn’t include this in mine, but if you can find or make it, then absolutely put it in)

Taken as stated in Paul Hollywood‘s book ‘How to Bake‘, although I have added notes in brackets where necessary if I felt it was different for me.

Note: There are 3 times where you need to leave the dough to rise for an hour or more, so make sure you leave enough time in the day to make the recipe!

1. Put the flour into a large mixing bowl. Add the salt and sugar to one side of the bowl and the yeast to the other. Add the butter, eggs, milk and half of the water and turn the mixture round with your fingers.

Continue to add the water, a little at a time (you may not need to if your dough is too sticky from the humidity), until you’ve picked up all the flour from the sides of the bowl. You may not need to add all the water, or you may need to add a little more – you want dough that is soft, but not soggy. Use the mixture to clean the inside of the bowl and keep going until the mixture forms a rough dough. 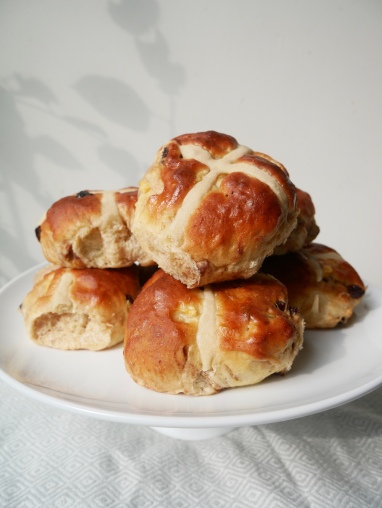 2. Tip the dough onto a lightly floured surface and begin to knead. Keep kneading for 5-10 minutes (add extra flour to the surface – and your hands – as you need it, as I found it just kept sticking so much from the humidity). Work through the initial wet stage until the dough starts to form a soft, smooth skin.

3. When your dough feels smooth and silky, put it into a lightly oiled large bowl. Cover with a tea towel and leave to rise until at least doubled in size – at least 1 hour, but it’s fine to leave it for 2 or even 3 hours.

4. Tip the dough onto a lightly floured surface and scatter the sultanas (or raisins), mixed peel (or not), orange zest, apple and cinnamon on top. Knead in until evenly incorporated. Cover and leave to rise for a further hour.

5. Fold the dough inwards repeatedly until all the air is knocked out. Divide into 12 pieces and roll into balls. Place, fairly close together, on 1 or 2 baking trays lined with baking parchment or silicone paper.

6. Put each tray inside a clean plastic bag and leave to rest for 1 hour, or until the dough is at least doubled in size and springs back quickly if you prod it lightly with your finger. Meanwhile, heat your oven to 220C (not fan).

7. For the crosses, mix the flour and water to a paste. Using a piping bag fitted with a fine nozzle, pipe crosses on the buns. Bake for 20 minutes, or until golden brown. Warm the apricot jam (or honey) with a splash of water, sieve and brush over the tops of the warm buns to glaze. Cool on a wire rack.

I really hope you make these and enjoy them! As always, let me know if you do, I would love to see how they turn out. 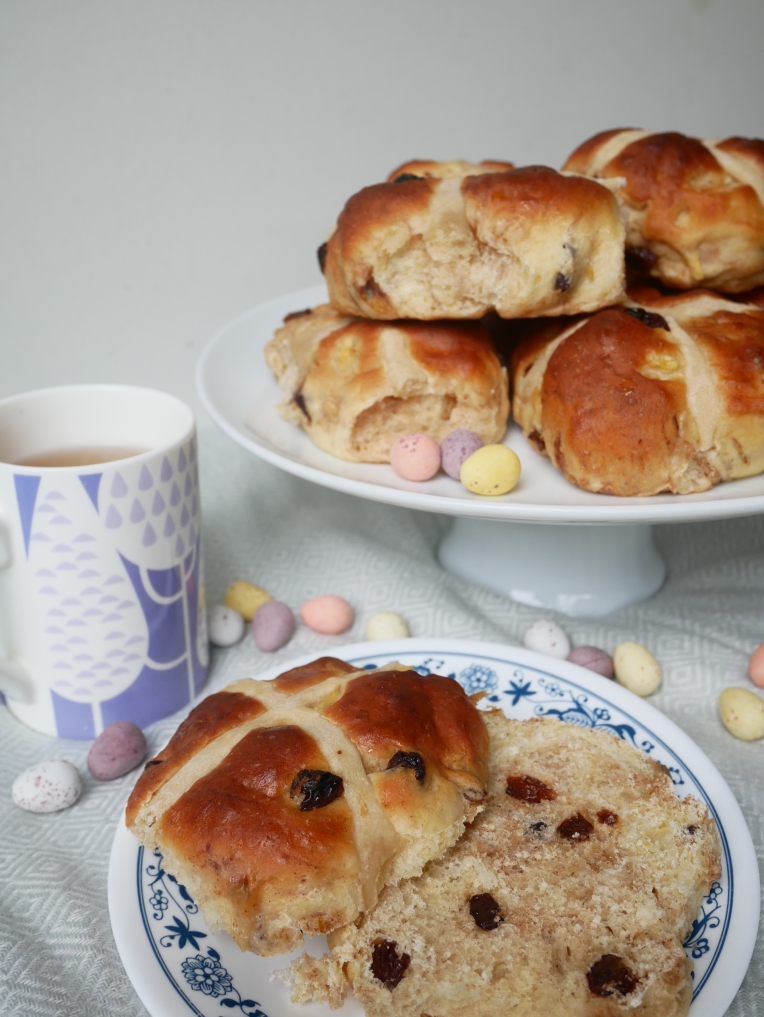 One thought on “My Hot Cross Bun Addiction”