Since I was a child, it had been an ambition of mine to visit Pompeii, and a few months ago I finally made the trip.

It was as interesting and spectacular as I imagined – perhaps even more so – but the scale of it was far larger than I had thought it would be. 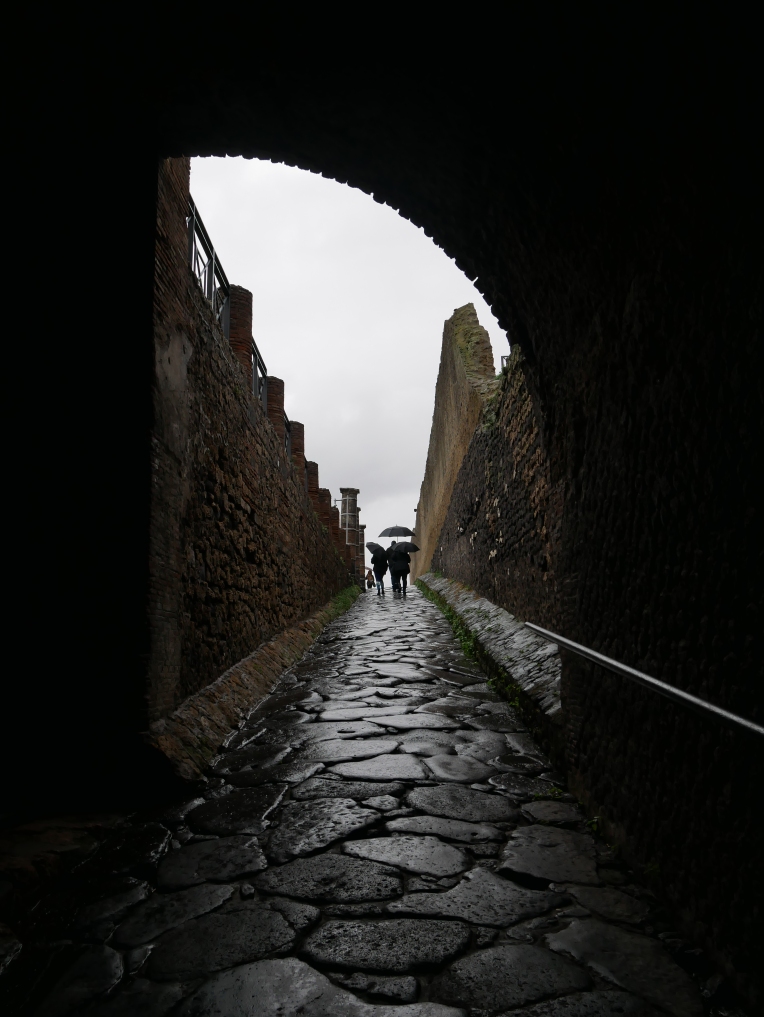 Unfortunately, we weren’t blessed with the best weather. Actually, that’s an understatement. It poured with rain the whole day, with only a little respite between showers. However, the weather meant that not many people had chosen that day to visit and luckily we had so many of the areas to ourselves. It was actually perfect. Our day ended with the both of us pretty much drenched outside of our raincoats, but thoroughly happy nonetheless! 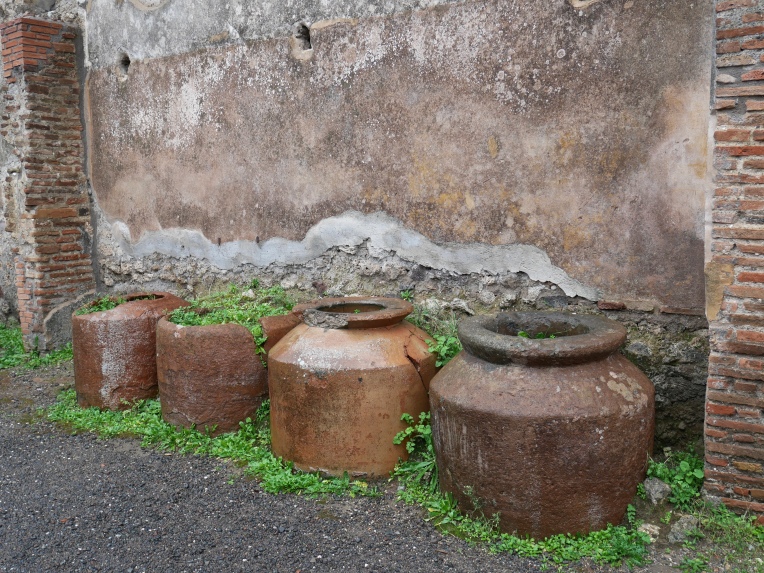 Pompeii was an Italian city in Roman times that was almost destroyed by a volcanic eruption from Mount Vesuvius. Although much was damaged and I imagine every resident killed, the buildings themselves are still standing and the streets still walkable. There are statues intact, many examples of Roman artefacts untouched, and mosaics, paintings and carvings still visible. 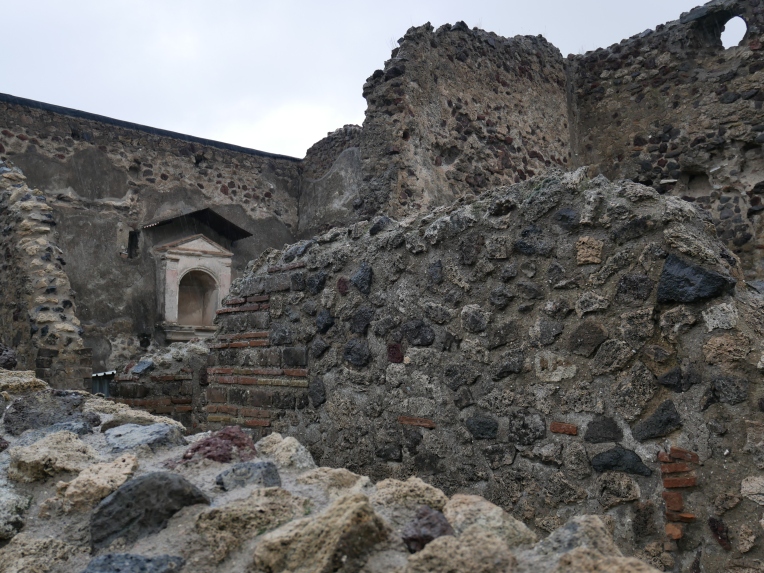 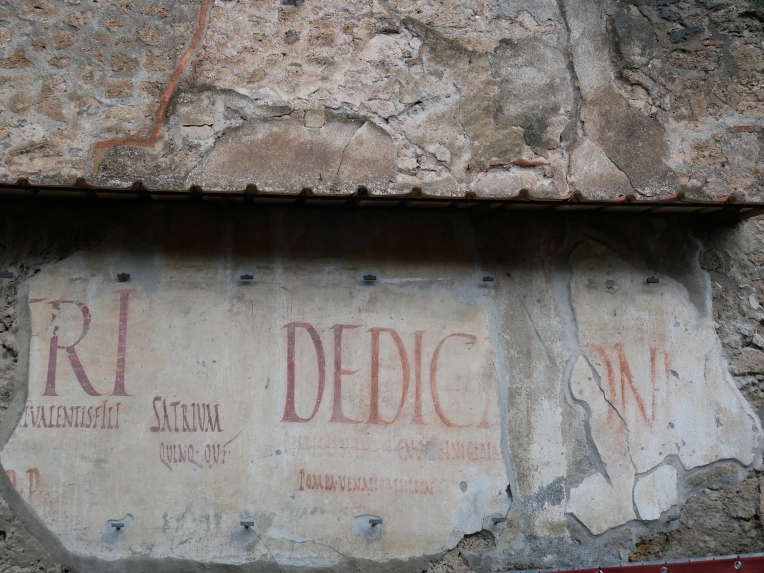 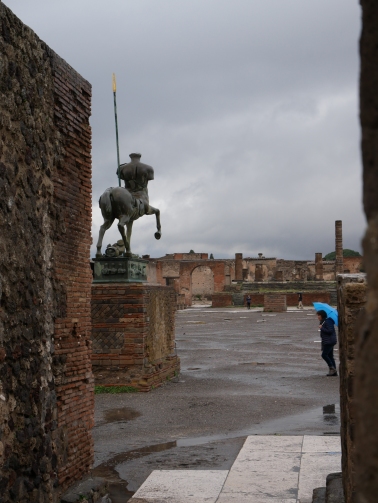 A couple of statues on display here are more recent pieces of art. The centaur in the main plaza and the huge man facing over the new city of Pompeii are examples left from an exhibition of sculptures by Igor Mitoraj that fit perfectly here. 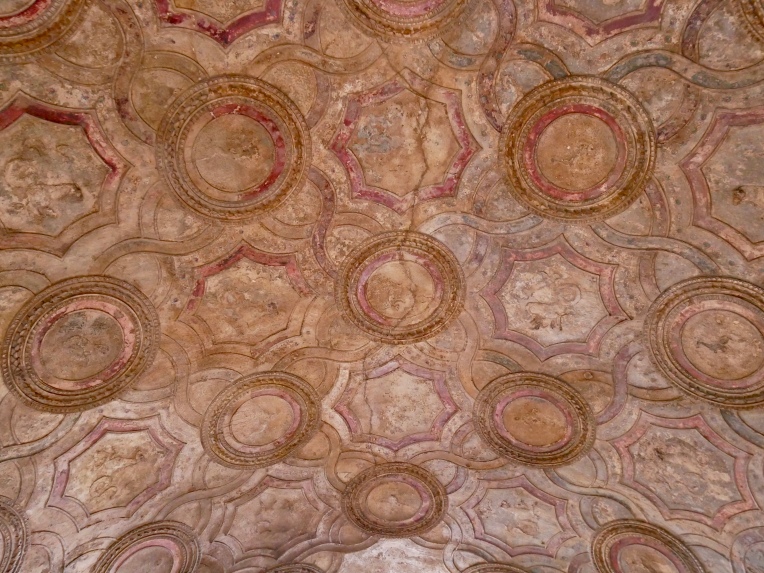 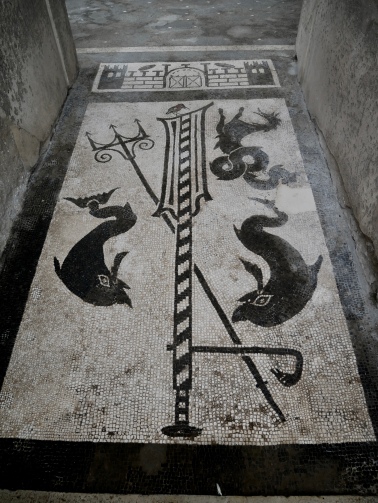 Speaking of which, the original examples of art here are just incredible, as you can see from the amount of detail visible in the murals and paintings throughout the city. A lot of the mosaics have been painstakingly restored, but some are as they were, partly damaged but insanely beautiful. 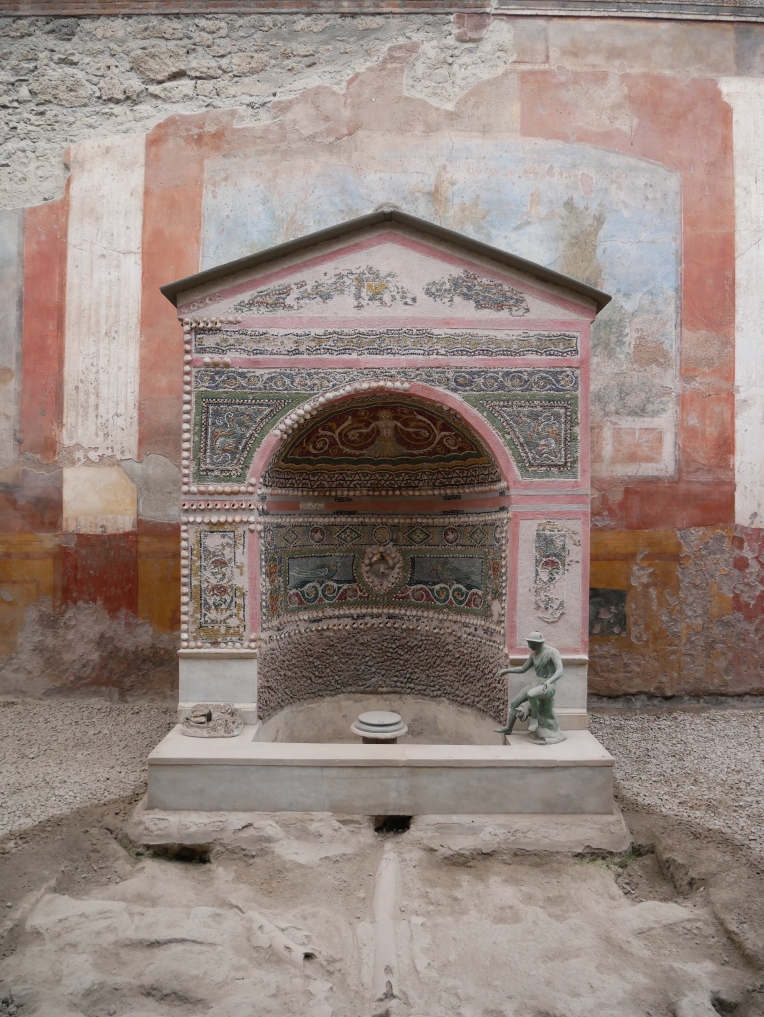 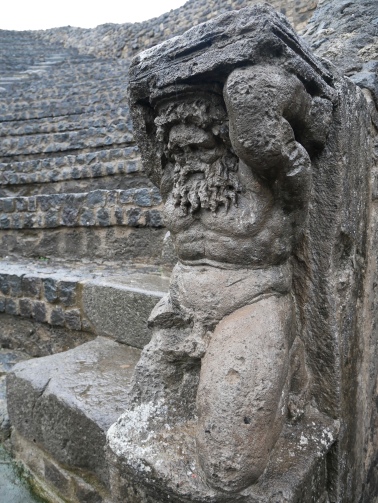 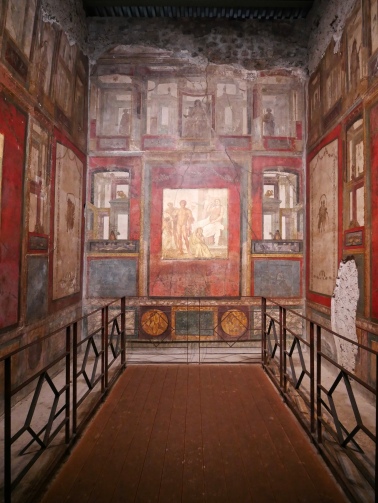 Funnily enough, I never imagined so much would still be standing, both architecturally and artefact wise. I had obviously studied Pompeii at school, read about it and seen the odd historical TV show exploring the site, but nothing can prepare you for the reality of what you’ll find.

I know that the volcano preserved the city, I know some parts have been restored and it’s all very well protected now, but the fact that so much remains is still so impressive. 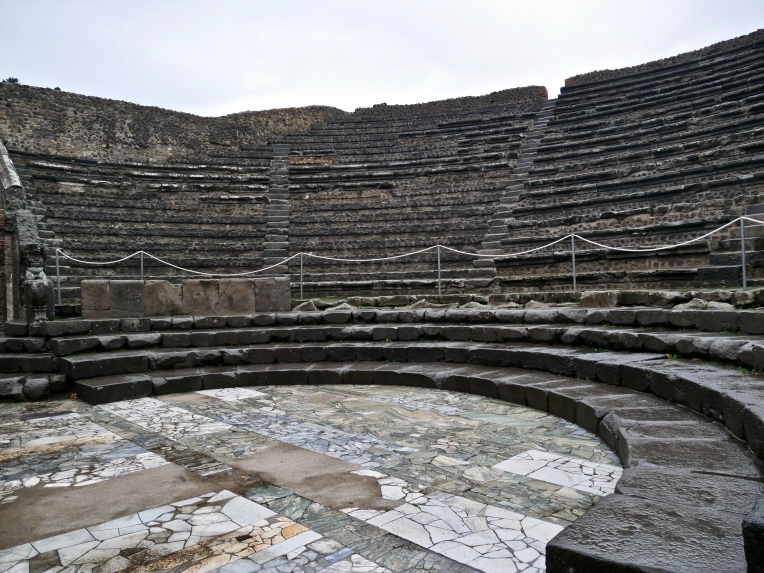 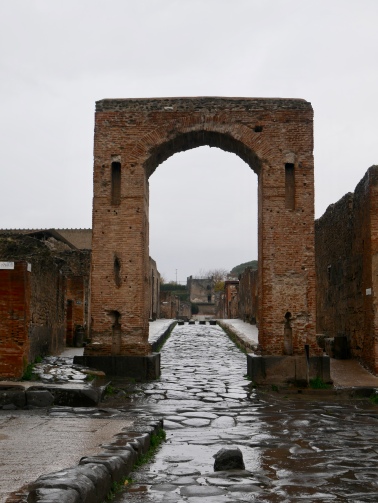 It’s an insanely well preserved look at life in the Roman era. One of the most amazing details is that you can still see the chariot wheel tracks in the road where they would have run over and over again.

They even found food that the locals had been eating at the time of the eruption. In Pompeii there’s a representation of almost every part of their city life; from theatres, houses, and bakeries to bath houses and main squares. There’s even a brothel that has remained pretty much intact! You can see their communal water fountains and ovens, and even temples to the gods. 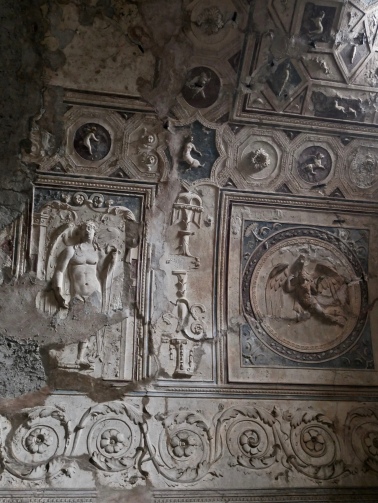 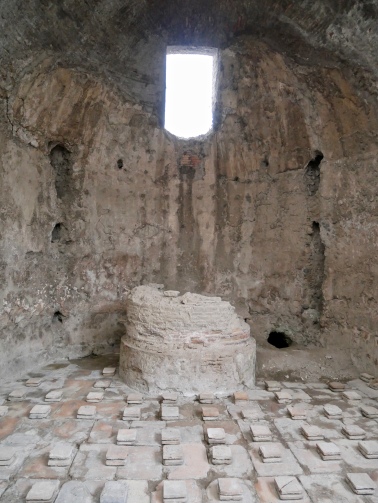 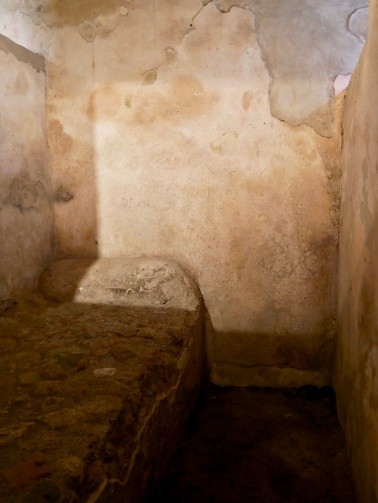 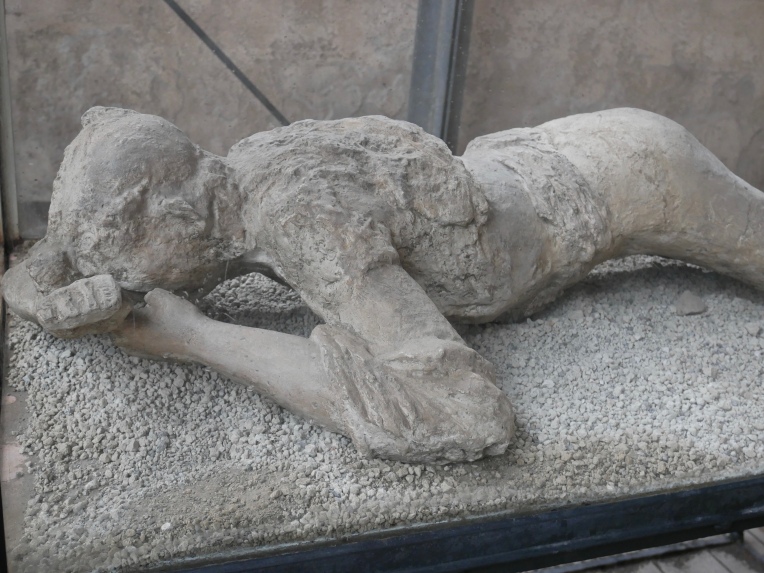 The saddest part is seeing the moulds that they took from the cavities in the lava flow where human bodies had been. Some hunched over, some lying face down on the ground, and there are even children amongst them. I can’t imagine what it must have been like to have been trapped there, unable to leave. 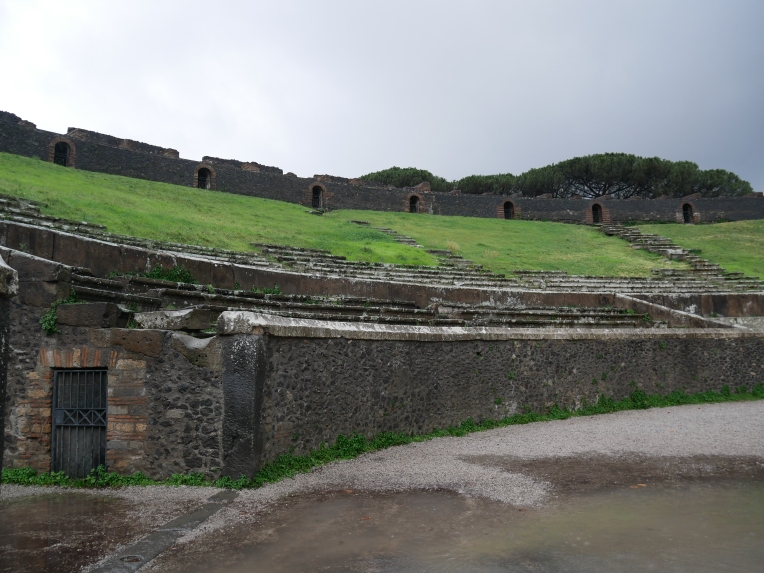 Be prepared for parts of the city to be closed for restoration. When my brother went in the summer, the whole colosseum was closed, which was such a disappointment for him. Luckily for me it was open again, but plenty of other sections were closed to the public, so just keep that in mind when you go. 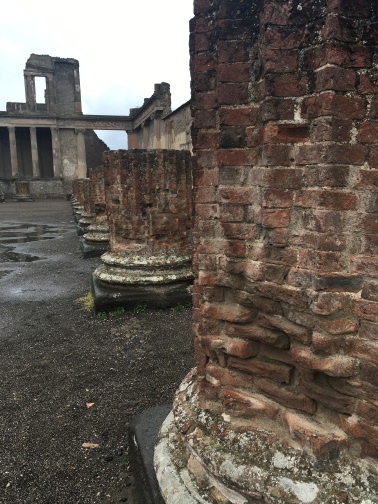 Regardless of the closures, there’s still not enough time in the day to see everything there! The site is vast, and even though we were there for over 6 hours, there were sections of the city that we had to sacrifice to see others. Definitely prioritise what you want to see. 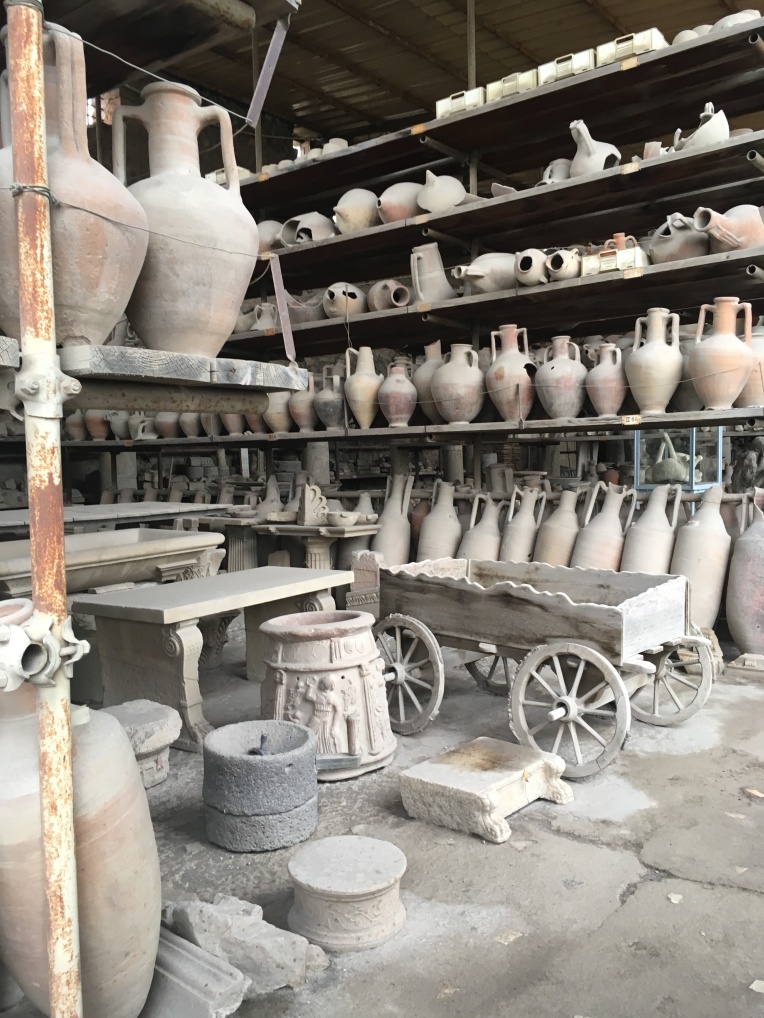 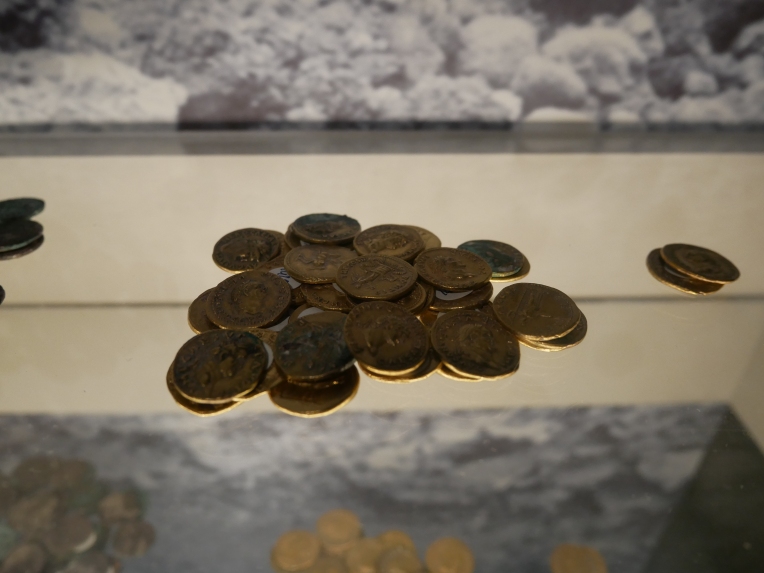 It was an amazing place to be in and I wanted to see every last detail, but the site is too vast to see in one go. I’ll definitely have to return to see the parts I missed. I’d love to visit the villas that are a short walk from the main city and also to visit the artefacts on display in the museum in Naples. I must have taken hundreds of photos of what I did manage to see in my time there, but sadly I couldn’t include them all here!

Even in the rain, the city was fascinating and beautiful and, come rain or shine, I can’t wait to go back again.

If you want to know more about the historic facts, history of the excavation and details of specific locations inside, then I would recommend starting with the main website here. You can also buy tickets and plan your visit here too.

The Man in Seat 61 is a great website to look at if you want to travel by train from another Italian city to Pompeii.

🇯🇵Day 21 of #japanuary - TEMPLES & SHRINES. Togo Shrine in Harajuku was such a beautiful surprise. It’s tucked away behind the extra busy shopping street of Takeshita Dori, but you’d never know. It’s such a peaceful spot, with a koi pond and lush greenery surrounding one of the entrances. The integration of places like this within an urban environment is one of the reasons why Tokyo is such a great city. (Full list of japanuary topics can be found @cakeswithfaces) 🌿
I’m so behind with my days 🤦‍♀️ but.... Day 20 of #japanuary (by @cakeswithfaces) is DAY TRIPS.
✨ Day 18 of #japanuary was NIGHT SCENES. Every year from mid Nov to mid Dec, Rikugien Gardens have evening illuminations where they light up the trees in all their autumnal colours. It’s amazingly beautiful and you get to see the garden in such a different light (literally!) 🍁 check out @cakeswithfaces for the full Japanuary lineup! 🍂
🍯 He has to be one of my favourite characters of all time and so for National Winnie the Pooh day today (author AA Milne’s birthday) I wish I could have ridden Pooh’s Hunny Hunt @tokyodisneyresort_official in celebration! It’s a fun trackless ride with a queue that winds inside the pages of a book. It’s so beautifully themed! 🐝
✨I’m a day behind on #japanuary , so today I’m doing CUTENESS OVERLOAD! All of my cute photos in Japan were either of Disney, Pokémon or food.... plus it was Christmas time which made them all doubly cute!! I mean, it’s Mickey & Minnie as snowmen and a Pikachu tree!! 💕 Check out @cakeswithfaces for the daily Japanuary lineup! 💕
Day 14 of #japanuary is HISTORIC JAPAN. Hasedera in Kamakura is a temple that was established around 1300 years ago and therefore a pretty good choice for this historic post! The main hall is where the famous wooden Kannon statue is located, but there is so much more to see in the grounds of the temple, with stunning gardens, ponds, shrines and a cave. This photo shows the entrance to the beautiful rock garden in front of the Shoin Hall. If you take a trip to Kamakura (you can get there in around an hour from Tokyo), you definitely need to visit Hasedera! 🌿 Follow along with Japanuary on @cakeswithfaces page! 🌿
Day 12 of #Japanuary: STREET VIEWS. I think I must’ve taken a million street views whilst wandering around Tokyo, but I think this one outside Sensō-ji might be a favourite. This area in Asakusa is so busy during the day but when all the shop shutters come down it’s actually a very peaceful place. (see @cakeswithfaces page for the full Japanuary list!) ✨
🌿I’m a bit late to the party in joining @cakeswithfaces #Japanuary, but it seems I’ve started with a good theme - BEAUTIFUL PLACES. Japan is such a beautiful country and somewhere I was hoping to explore more of last year (sadly not to be). A lot of the beauty for me comes from the nature out there - not only the mountains and countryside, but the small (and larger) green spaces or quiet spots that pop up throughout the sprawling cityscapes. Places of peaceful relaxation in a busy space. I was thrilled to visit during the incredible autumn foliage season, but I would love to visit either Nagano or northern Japan in the snowy winter, as I think it would just be magical. Fingers crossed for 2021! 🍁
👑 In some countries, like Spain, today is celebrated as the Three Kings day, and children even receive gifts. I was in Spain a few years ago on January 6th and so we celebrated like the locals by eating a pretty sizeable king cake filled with cream. I also won the good luck charm that the bakers put inside, which in fact makes you king for the day! My charm was a little blue dinosaur and I carry him around with me to this day. 🦕