Mistura has finished for another year and I want to share some of my favourite parts with you and also a little bit of some of my not-so-favourite, to give you a view of this year’s offerings!

We’ll start with a little overview…..

Mistura is a gastronomical fair held in Lima once a year to showcase some of the best food that Peru has to offer.

People from all over the world flock to try tasters from a selection of Peruvian restaurants, buy Peruvian produce from the grand market and drink piscos and Peruvian beer.

This year the entry cost either s/17 (Mon-Weds) or s/26 (Thurs-Sun) with parking on site at a flat rate of s/20 per day. Great value for a whole day, not so great for only a few hours of an evening after work! You can try going with more people to cut parking costs, using the special bus from downtown (not the best location for a lot of people), or using an Uber (special Uber stands were set up outside the festival to help with this, including their car pool service from s/5 if you don’t mind sharing!!)

Cash is only accepted in the market and at some drink stands, so you need to exchange your cash for tokens to spend around Mistura.

The festival is always split into different areas that are devoted to specific kinds of food or drink. This year, some areas included ‘The Sea’ (seafood), ‘Here and There’ (international fusion and other areas of Peru outside of Lima), ‘Pisco’, ‘The Bars’, ‘Food Trucks’, and ‘Desserts’. They also had a couple of special areas for India (a little, beautifully decorated tent) and Mexico (a giant pyramid pavilion).

There was also an auditorium for entertainment, which offered cooking demonstrations (some of which were by chefs from some of the best restaurants in Peru) and presentations, different Peruvian bands and music, and even concerts for children.

Let’s get started with a few of my favourite options from Mistura 2016.

We tasted a few over the couple of days we attended. Here are a selection of the best!

Maddok Chocolate – a favourite of mine and super creamy

Agora – I can’t remember which style this was, possibly an IPA, but it was a fantastic beer. Refreshing and still packed with flavour.

Tacu tacu, to put it simply, is a mixture of cooked rice and beans (plus other ingredients) formed together in a long block (or sometimes flat and round) and pan fried. It’s amazing and a firm favourite of mine.

This version was full of flavour and the beans still had a little bite to them, even though the tacu tacu was creamy overall. The duck was perfectly cooked and tender and was easy to pry from the bone. 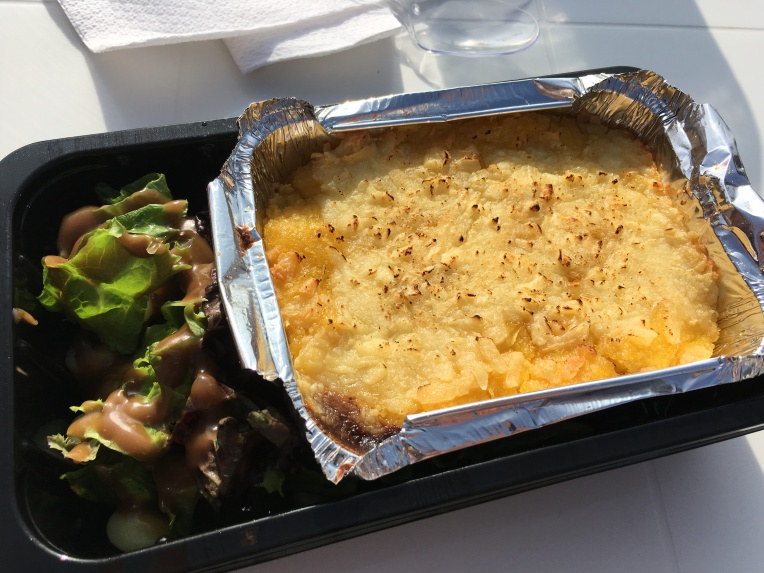 This was actually with mushrooms (bleurgh – hate them) but I picked mine out and tolerated the leftover mushroomy sauce!! The pastel was up there with some of the best I’ve ever tried. It was sweet and creamy and the mushrooms obviously gave a savoury contrast to this. So damn good! Even the salad was delicious with a sweet vinaigrette dressing. It complemented the sweetness in the corn  but also gave refreshing breaks from the thick and creamy texture of the pastel.

The meat was cooked to perfection, it was juicy and had a good flavour, albeit a bit too salty for my preference.

Just like a regular Mojito, but Aguardiente de Caña (alcohol made from sugar cane) replaces the rum and Chincho replaces the mint. Chincho is a native Andean herb which you would regularly use when making a Pachamanca (a traditional dish consisting of meat, potatoes and vegetables wrapped in leaves and cooked underground like a hangi in New Zealand). In the Mojito this herb was super flavourful and partnered so well with sweetness of this drink.

They had many variations of this hot herbal drink (a smooth syrupy drink made from toasted barley, medicinal herbs, sugar and limón juice), but Camu Camu (a fruit native to Peru that contains an extraordinarily high amount of vitamin C) is a solid favourite of mine and I couldn’t pass it up!

Extremely yummy, if not pretty small for the money. It came covered in a passion fruit sauce which was a perfect accompaniment!

The grand market always has some great produce to buy. Cheeses and honey all the way from Cajamarca, blue potato crisps, amazing cacao and chocolates, and native potatoes to name just a few! 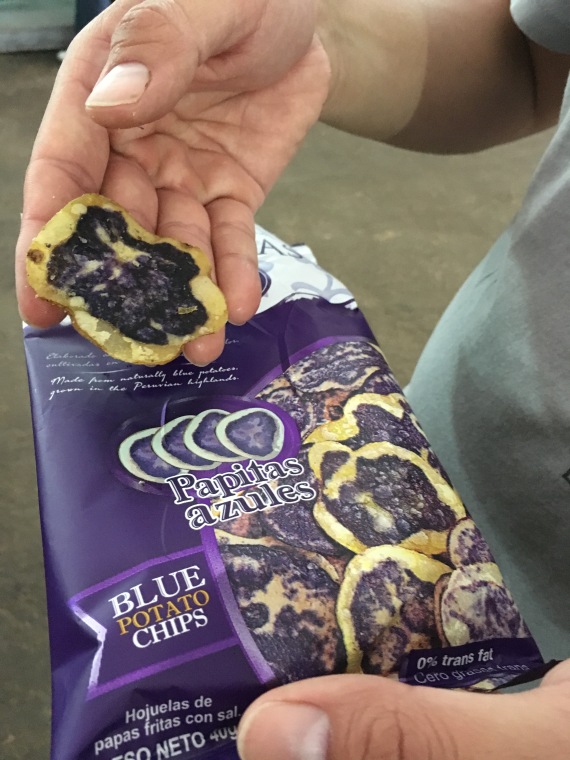 I also tried a tasty chocolate filled with camu camu (beautifully decorated with a purple shimmer), which was a perfect balance of sweetness and acidity, but I can’t find the name of the stall that I tried it from.

We admired the beautiful native potatoes in all their shapes and colours and ate juicy aguaymanto and queso mantecoso (strong, buttery cheese). 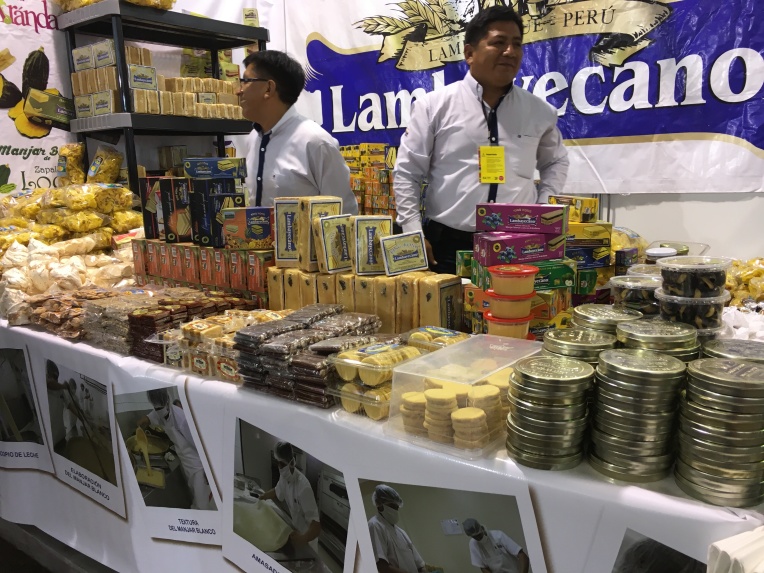 The market is full of bargains and so much produce to take home to cook with, some of which you don’t often find in Lima.

We came to watch 3 bands perform as they were either bands that would normally be much more expensive to see than the s/17-26 entry price or who don’t often perform here in Lima. If you find bands like this, then the ticket price does give you so much more for your money!!

We saw the excellent Colectivo Circo Band, Cumbia All Stars, and a huge favourite of ours Novalima. It was great to be able to see these bands in the smaller and more intimate space that the auditorium offered. Performers play for 1 hour each, so perhaps a smaller set than a regular show, but it was actually more than enough to enjoy!

These are some dishes, restaurants and drinks I would recommend from previous experiences, although we didn’t actually have them this time around.

The pork cooked in a caja china (Chinese box) is always amazing. It is suspended over hot coals inside a big box (off the ground) and cooked in there. It comes out juicy and with the crispest of crackling (pig skin). I would say we have this about once a year whenever we find them at a food event.

At Mistura they also did a Chancho al Palo which is pork on a rack suspended over an open fire which you can see above.

Last time we attended they made fettuccine in a cocona (a very large orange berry with an acidic flavour) sauce with cecina (a meat popular in the Amazon). This was extremely delicious, super creamy (as every good pasta dish should be!!) and was available again this time. I believe it was still pretty popular!

Beautifully cooked burgers that come in many different variations that always come in a seeded bun. I’ve tried a good sampling and I always come away happy! At events they offer special dishes of skin on chips/fries that come topped with cheese and other bits that are not normally available on their menu and I would definitely recommend those!!

Pisco Porton – the best pisco, in my opinion!

El Chinito – one of my favourite places for Chicharron in Lima.

Ayahuasca Restobar and Huaringas – both are fantastic, but very different, bars in Lima that serve a multitude of pisco cocktails.

All of the above were amazing!! However, there were a few areas that I felt could use some improvement.

Prices had definitely risen over the last few years, both for entry and for the meals and to be honest were not that cheap anymore (aside from the half portions). At the peak you could pay s/46 before you’ve even had your first bite or sip. You can buy your tickets for a substantial amount cheaper up to a certain date before the event, but this can sometimes be a bit hit & miss depending on work schedules and entertainment.

Prices are still definitely fabulous for tourists as you can see by the £ sign exchanges I put in the food information above!! Also, charging s/9 for one single CD sized taco in the Mexico pavilion was so expensive compared to what you received for the same money everywhere else.

Sunday night apparently = drunk town. Some people I saw couldn’t even stand or walk properly. One extremely drunk person was given to a security guard who did absolutely nothing with him and sent him back to the bar. Also Novalima’s set ended up with a drunk middle aged man crying into his Peru flag in the middle of the stage. Super weird and awkward. There were also no bag checks on arrival meaning anyone could bring anything in with them and no one would know. Security was seriously lacking.

This was not a festival wide problem, only in a couple of things we had. I know it’s late but that doesn’t mean you should stop serving fresh food. Especially for people who can only come in the evenings after work. I had a rice dish which was served almost cold (not intentionally) with rice that was old and a bit hard, stale doughnuts (no kitchen, but perhaps a fresh delivery wouldn’t go amiss), and cold yucca balls filled with honey that had obviously been sat around a long while after frying. I was also unimpressed with a place I knew was good and has an amazing reputation, but failed to deliver with overcooked products that could have been so much better.

Mistura is such a good way of seeing a lot of what Peru has to offer gastronomically in a short time, especially for holiday makers who really want to discover the diverse food  here. Prices are incredible for tourists too making it a top destination to visit on your foodie holiday to Peru.

For tourists and locals alike, I would recommend spending a good few hours here to get a taste of some great options. Go with friends or family so you can get a taste of lots more dishes by sharing amongst yourselves. Also, check out the entertainment schedule to see if your favourite bands are playing and plan to go on the same day as that will make parking and entrance have so much more value! If you’re not bothered by any specific band, then maybe see when some of the top chefs are demonstrating their skills and visit then.

Mistura has so much to offer and hopefully it, and the stall holders, make some little improvements for next year to make it amazing for everyone.

Hopefully I’ll see you all there!!!

2022, you started so badly but you ended so brilliantly. After leaving Lima and moving home to the U.K., I tried to say yes to almost every opportunity that came my way and had the most amazing experiences for it. So, so excited for 2023…
🎄Christmas in Hogsmeade….
✨🎄 Duel of the Christmas jumpers, duel of the fandoms, and duel of the parks.
🌲Time for a winter walk!
💥 MCM photo dump!
⚡️MCM Comic Con London Highlights!
4 weeks of being an auntie to this little bundle of cuteness 🥰 Amazing work @anni.jenkins and @physical_blueprint - he’s gorgeous ✨
"When life seems hard, the courageous do not lie down and accept defeat; instead, they are all the more determined to struggle for a better future."
BEST. DAY. EVER
%d bloggers like this: