We have just got back from the most fabulous trip to Hungary and Slovenia and I can’t wait to start sharing the highlights!

One of my favourite evenings in Budapest was the one we spent in one of the ruin bars in the old Jewish district on the Pest side of the river. 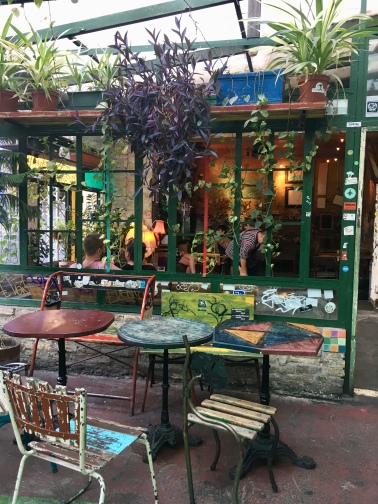 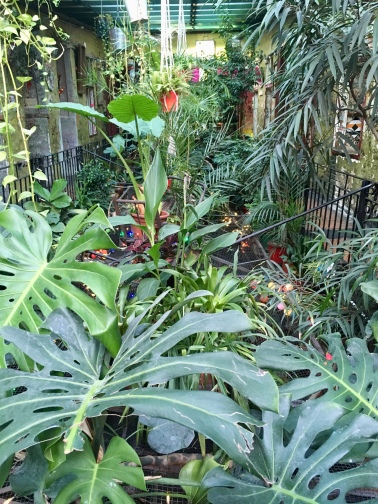 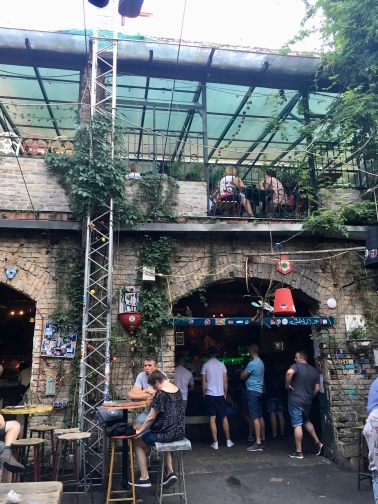 Ruin bars are a big part of Budapest’s culture nowadays having started up almost 20 years ago. In the decades since the end of World War II, there were various abandoned, derelict, disused and sometimes crumbling buildings in the old Jewish district. Since the early 2000s some of these have been saved from demolition and instead turned into spaces for the local people, not only as a social drinking spot, but for a number of other reasons too (concerts, film screenings, markets etc). These spaces however have often not been completely refurbished, but instead left as their bare brick original layouts. The owners then fill them with mismatched furniture, extremely random decorations, neon signs, and a general mish-mash of decor. There are often plants growing all over the place and graffiti on all of the walls. Some of the more modern incarnations of ruin bars can be slightly more sophisticated in vibe (less ‘ruin-y’ and no mismatched furniture) or cater more to the clubbing crowds with a huge multi dance floor, multi level club environment.

However, the original ruin bar, Szimpla Kert, still seems to have retained its original ‘ruined’ atmosphere and it’s one of the most interesting spaces I’ve ever spent time in! Although we started out in the main open courtyard, we spent the majority of our night in a bathtub. Yes, you heard me. One of the rooms has four bathtubs with cushions in that act as double seats. They were honestly so comfortable we just couldn’t bring ourselves to leave. They were just the best seats in the house! We were the first ones in that evening, and not long after a lot of people followed in our footsteps and filled the other three. It was a popular spot that night! It wasn’t the only interesting seating space, however, as there’s also a car in the centre of the courtyard which is perfect for a small group to sit in. 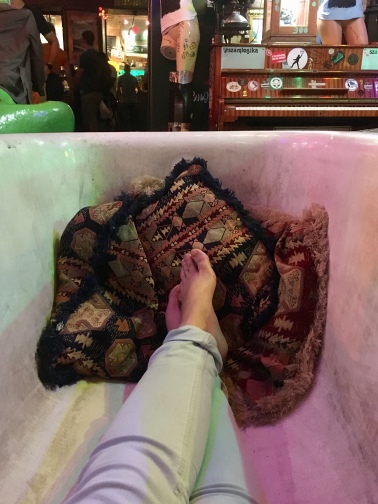 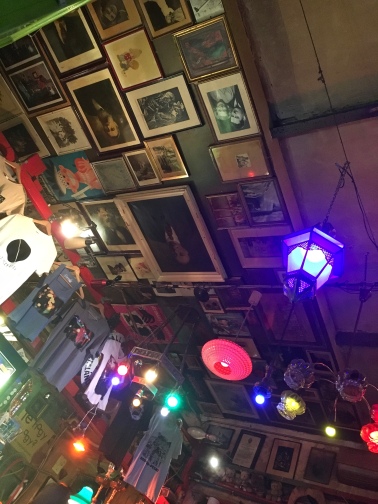 They have a number of bars dotted around the building, including a local craft beer bar, cocktail bar and wine bar. Plus, they also have live music some nights in one of the side rooms (including up and coming local talent), and they even have a farmer’s market on at the weekends. I didn’t have the opportunity to try any, but their food claims to mainly come from farmers, be completely palm oil free, and take into account different food allergies too. It’s such a fabulous communal space and obviously well used by the local community and tourists alike. They even open their space to local non-profit organisations for them to raise awareness.

If you want to visit a ruin bar, I highly recommend the casual environment of Szimpla Kert, but I’m sure there’s one for everyone’s tastes. Most are open from around lunchtime up until the small hours of the morning so you can even visit during the day if you would prefer that, and I believe some even let children in up until a certain time (do check with the bar beforehand though). We rocked up at Szimpla at about 5.30pm when it wasn’t too busy and had a very relaxed atmosphere, but by the time we left at around 10.30pm it was pretty packed and there was a queue outside to enter (something to bear in mind if you don’t like waiting!). Plus, if you’re visiting the bars in this area, I highly recommend you finish your night off with a trip to Falafel Bar, a few minutes walk away, for a fabulous falafel & hummus pitta for the – quite frankly marvellous – price of around £2.50. The perfect end to a great night out.

A trip to Budapest nowadays really isn’t complete without a visit to a ruin bar, it’s that big of a part of the city’s scene.

One thought on “Hungary: Ruin Bars in Budapest”

💌 No post on Sunday eh?
🎃Happy Halloween!
🐆✨When the Wizarding World meets the natural world…
🌿One of the highlights of my summer this year was spending over a week in Cornwall house sitting for my godmother and taking care of her menagerie of animals! It’s honestly one of the most beautiful counties in England and I’m trying to get down every year now, if I can. Everyone heads for the coast but inland has a different kind of lush, green beauty - perfect for dog walks (swipe to the end to see a very happy pup in the stream!)🐶
💍 7.8.2021 // Exactly 2 months ago, two of my favourite people finally got married - my brother @physical_blueprint and his wife @anni.jenkins! It was such a wonderful day and I was even able to celebrate alongside my other half, who’d finally arrived in the U.K.. I can’t wait for the big celebration next year without a restriction in sight, but for now I’m so happy they were able to tie the knot! ✨ (I know it’s taken an age, but I’m terrible at sorting and editing my photos quickly….and posting 🤦‍♀️)
I’ve been fully soaking up life the last few months having finally been reunited with my other half (border closures suck) and moved temporarily to another country. So, before I cover my feed with photos from Italy and autumn truly takes over I’m going to share a few of my fave summer memories. Obviously going to new (to me) places to eat is a favourite hobby of mine and I finally got to visit @aromebakerylondon and try their delicious pastries. If you go make sure to grab their bacon miso escargot (warmed up) as well as something sweet for later!
🎠 The Disney parks around the world will have all finally reopened by this time next month. I’ve been watching the The Imagineering Story documentary on Disney+ about the history and creation of the parks, technology and rides (highly, highly recommend), waiting patiently(ish) until I can visit WDW again for the 50th Anniversary celebrations!! 🐭✨
🌿 Happy Bank Holiday weekend! I’m missing the gorgeous bougainvillea in our garden in Lima at the moment, but the apple blossom is coming out on our trees here in England and it’s looking so beautiful. I hope you all enjoy whatever garden parties/gatherings you have planned tomorrow! 🌸
🌿Happy Earth Day! The world is such a beautiful place, full of wonder and magic, so let’s make sure it stays that way. Not only for us, but for everyone who comes after us too 🌱
%d bloggers like this: