I love a good TV mystery, especially when there’s a police investigation involved. But, I also love being transported to a new location with each one. A new town, city or country makes the perfect backdrop for each storyline.

We’ve become hooked on watching shows from other countries that always pop up on Netflix. We’ve been transported to Germany, France, Iceland, Denmark and Spain with a different mystery to solve in each place. 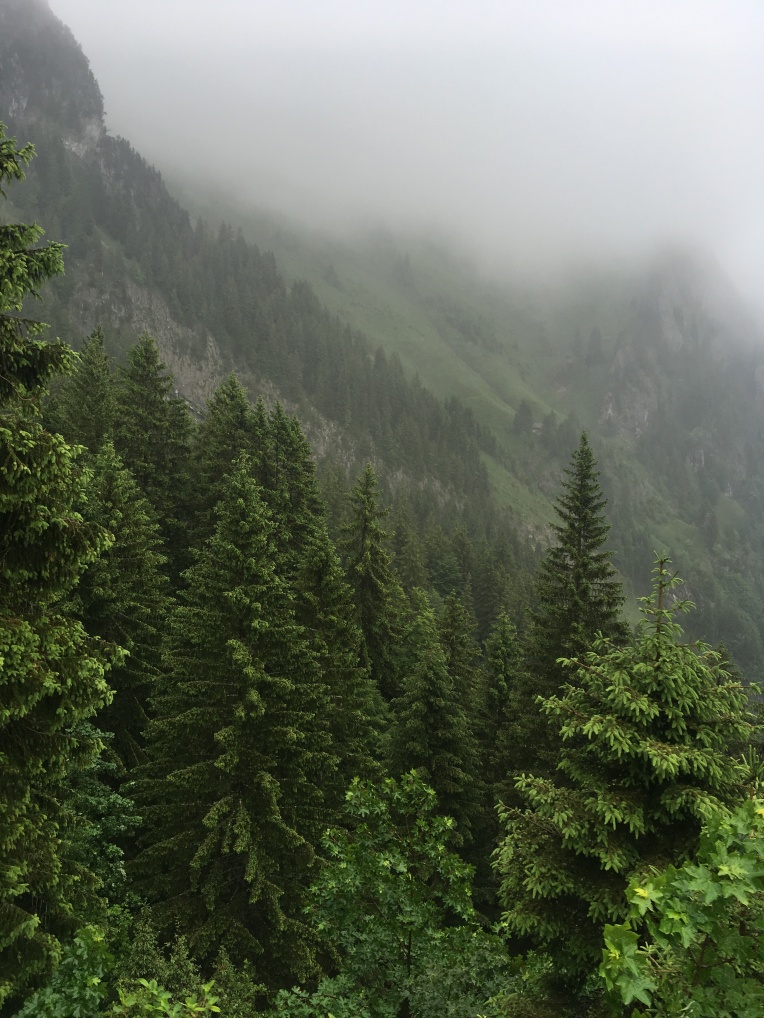 I feel like the misty forest on the side of Mount Pilatus in Switzerland is the perfect backdrop for this post, because aside from Iceland, the mysteries in the other 4 countries seem to take place in or around large forests. They do lend the perfect setting though, as they’re super beautiful, but also mysterious, isolated, sometimes scary and very, very dark. These gorgeous natural, rugged places do inspire me to visit each place though, from the mountainous icy landscapes in Iceland to the small towns of France to the beautiful Basque Country in Spain. I feel like filming locations can be a great way to get inspired for future travels, whether they are represented as their actual location or as a fictional place.

We also love to watch them all in the original language with subtitles, because I always feel like dubbing ruins the setting, action, and characterisation of the show. I like to hear the actual voices and emotions of the original actors/characters even if I don’t understand a word they’re saying! I love that the characters in the stories are native to the countries that are being filmed in and it gives it a much more genuine feel.

So, here are a few series – and film – that I would highly recommend you watch if you love a good mystery like I do. The majority of these are police related, but one has a whole other kind of mystery going on….

A small town in Iceland gets cut off from the rest of the country due to terrible weather and snowfall in the area. If that wasn’t bad enough, it also happens during a murder investigation that may or may not have something to do with a ferry that had just docked. We follow a detective, Andri, who clearly had problems in his personal and professional life that caused him to leave his police job in Reykjavik and return to being a small town chief of police. Is he trapped with the killer?

We loved this series and you could really sympathise with the main character. It’s not a fast moving show, but a lot of things happen in these 10 episodes to keep you guessing. Who is the murderer? What are these townspeople covering up? Is it related to a past crime? So many questions! Plus, Iceland is a stunning landscape for this ‘chilling’ mystery.

When a young boy goes missing in the forest near Winden, a small German town, secrets and stories are uncovered that span over 60 years. With no evidence to help in the search and strange bodies appearing in the woods, the police believe it may have something to do with the local power plant.

The second series of this fantastic time-spanning mystery wrapped at the end of last year, so fingers crossed it’ll be released on Netflix during 2019. We really enjoyed the twists and turns of this series and trying to guess how each character will play their part, or how they already have. I will be super interested to see how the next series expands on an already super interesting storyline. So, so good.

A new police chief arrives in the village of Montfaucon, France with his daughter, just as another teenage girl goes missing. She was last heard from in the nearby forest where she called her teacher, scared, asking for help. Was she meeting someone? Did her friends know anything about it? How many of the villagers are keeping secrets?

This is a pretty exciting series with new clues popping up all over the place, plus I love the small town feel, full of secrets and family drama. While it doesn’t flip back and forth through time, the past plays an important role in what is happening now, but the information only gets shared little by little so it’s really hard to guess what will happen!

A deadly virus is being spread by rainfall in Denmark, which causes a family to hide in an underground bunker owned by the father’s company. Years later the children, now older, emerge to find a very different world and head off with a group of survivors in search of their missing father and a safe haven. Is he still alive? What caused the virus in the first place?

So this is completely different to the other series I’ve recommended so far, because the mystery isn’t ‘who’s the killer’ (except, it is a little bit…), but instead, what happened, who is still alive, and is there anywhere that’s safe? It has a little bit of ‘Walking Dead’ vibes (due to the whole apocalyptic future thing), but in a less scary, un-zombie like way.

A serial killer is targeting teenagers in Elizondo, Navarra, a Basque town surrounded by deep forest haunted by myths and legends. An FBI officer reluctantly returns to her hometown to help with the case and not only has to deal with the deaths in the present, but also ghosts and memories from her past.

This is a pretty dark film, due to murdered teenagers and child abuse, but it has a great storyline that’ll keep you guessing as to what’s really going on. There are a lot of references to the mythology and legends surrounding the area, which give the story this otherworldly edge. The film is full of memories and flashbacks that help us to understand the main character, Amaia, and her issues with being back in the hometown she never wanted to return to, and it will all leave you wondering until the very end.

I hope you enjoy watching these as much as we did!

One thought on “5 Foreign-Language Mysteries to Watch on Netflix”

"When life seems hard, the courageous do not lie down and accept defeat; instead, they are all the more determined to struggle for a better future."
BEST. DAY. EVER
🌿 The meadows @angleseyabbeynt - the perfect place to relax.
🌸 Checking out all the new blooms @angleseyabbeynt 🌿 where the rose garden is looking so beautiful! 🌱
🇬🇧Come with me to see some of the Platinum Jubilee celebrations in London.
🇬🇧The celebrations are over, but it was a fun weekend to remember!
🌸A farewell to cherry blossom season…
💌 No post on Sunday eh?
🎃Happy Halloween!
%d bloggers like this: