In February we spent a couple of days exploring a little section of the Gulf Coast of Florida. It was a delightful 48 hours spent wandering the beaches, eating ice cream and drinking local beers. The sky was blue, the sea was turquoise, the sand was white and the parks were truly beautiful. We stuck to the southern barrier islands to the west of St. Petersburg, namely Treasure Island, St Pete Beach and Fort de Soto.

There is so much to do in these beachside towns that you could probably spend a good week here and still not quite do everything! I’ve made a little guide to everything we experienced when we were there in the hopes of giving you a good starting point.

St Pete Beach (the actual beach, not the town) is a long stretch of white sand, full of shells, that runs down the west side of the town. It’s a gorgeous beach and super clean too (all of the beaches that I visited here are) and it makes for a perfect afternoon walk if its not too hot with a little breeze. The colours of the shells here are beautiful, all pastel pinks and off-whites, and there are many an abandoned sandcastle (or sand dragon) as you wander along. It’s definitely a popular beach and even in February there were plenty of people about, but the beach is long enough and large enough to accommodate them! 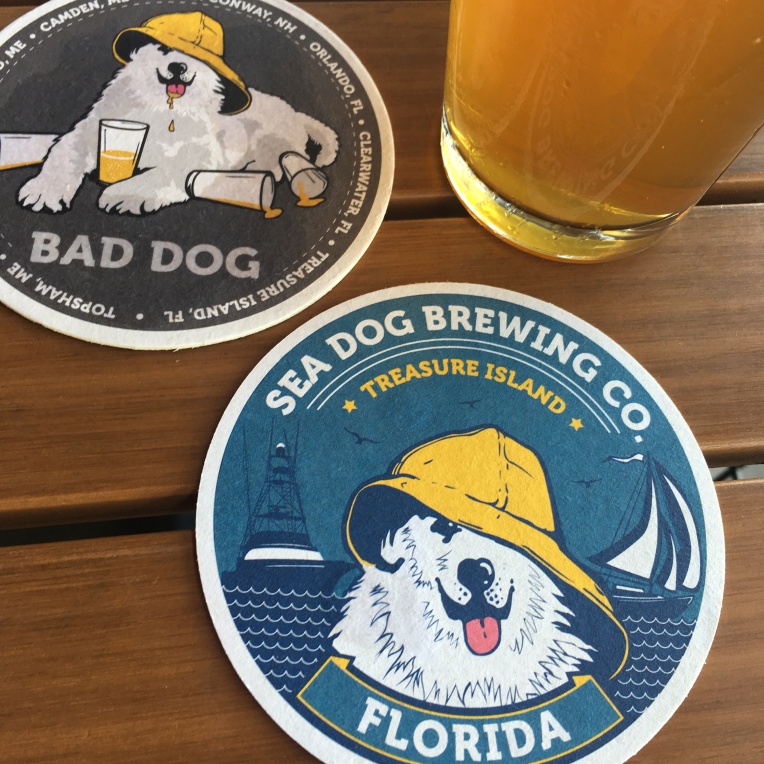 Sea Dog is originally from Maine, but they now also have a brewery here in Clearwater, Florida. The Treasure Island branch of their bar and restaurant (around 40mins from the brewery) overlooks the water, so I definitely recommend sitting out on the terrace if you can. The food here is delicious, but their beer is even better, especially during happy hour (Mon-Fri 2-6). Their Maple Bacon Stout is unreal – the taste of maple is vey strong and the beer is full of body and delicious – and their Blood Orange Belgium is super refreshing and packed with citrus flavour. 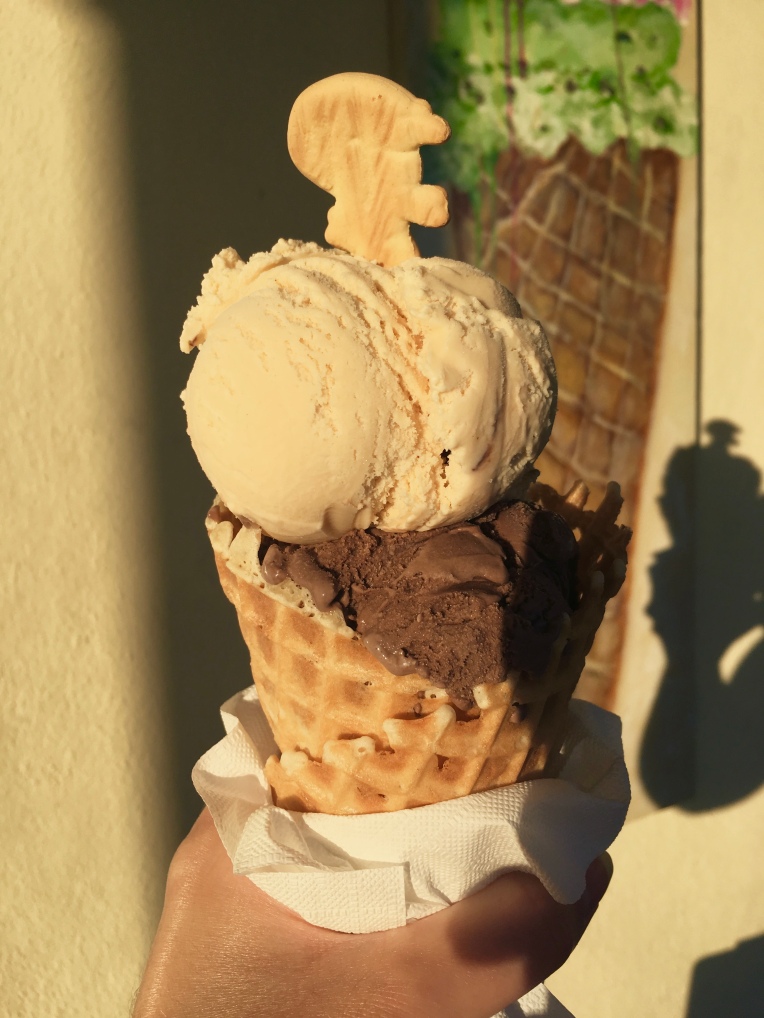 Larry’s Ice Cream‘s are ginormous. I stupidly – or heroically – chose a double scoop and I certainly wasn’t sure that I would finish it. They famously have 100 flavours of ice cream, so I couldn’t just visit and only get one flavour, could I?! I mean, it’s impossible to choose as they all look so good, but I managed to narrow it down to rocky road and peanut butter fudge (I think that’s right!) and they were creamy and full of flavour and I was pretty devastated when I genuinely couldn’t eat anymore. They also have a sister store down the road shaped like an ice cream cone, although I didn’t quite have time to stop there as well. 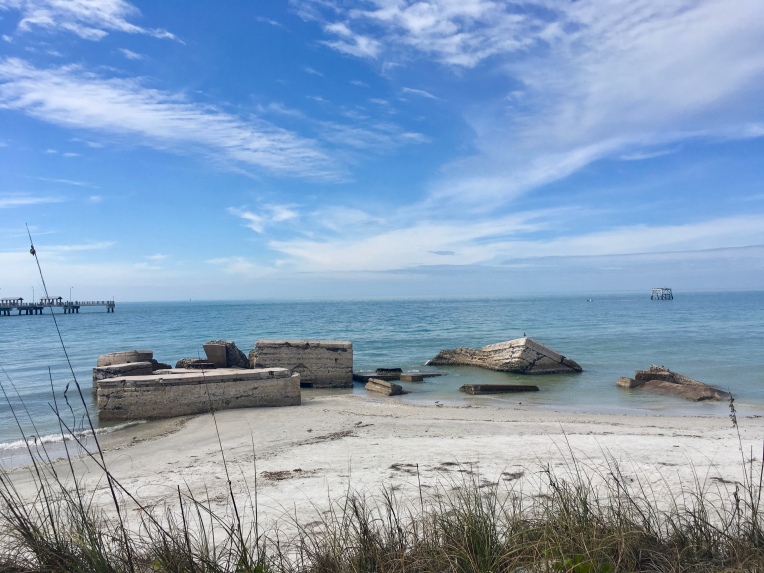 I wish we had had more time to explore Fort de Soto. There’s so much to see there, as it is split over 5 islands, but we had to be picky with where we stopped. I wanted to see the old fort that the park is named after and to wander down the pier to see if I could spot any dolphins (spoiler alert: I didn’t see any), and that was about all the time we had. The fort itself is spread over quite a wide area but we mainly visited the battery to see the old guns there. Do head down to the beach though, as there are even some ruins by the seashore, which were really interesting to see. 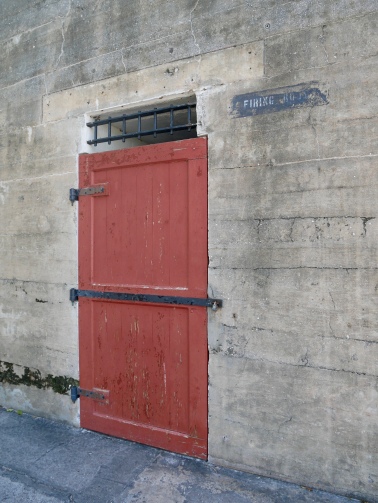 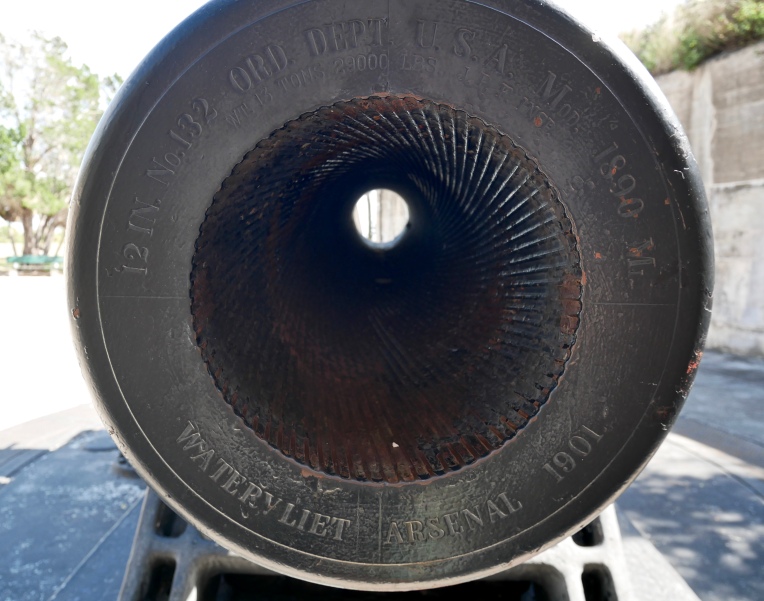 The Fort itself was constructed in the last years of the 1800s because of the Spanish American War and if you’re interested to read more about the history then there’s a PDF here that can give you more information. The area itself is a wildlife haven and 328 species of birds have been seen here alongside Loggerhead sea turtles who nest there between April and September. Dolphins do appear around this area, but I was unlucky and didn’t catch a glimpse of any, although I did see a large number of pelicans. 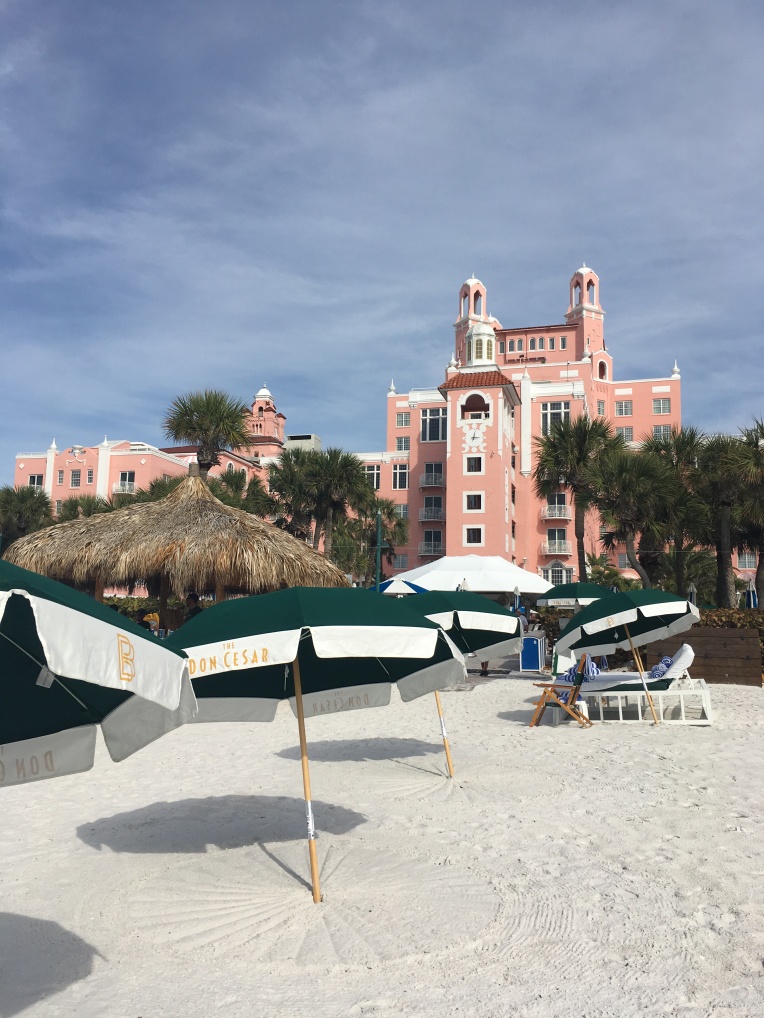 This is not a hotel recommendation, because I have no idea what the Don CeSar is like inside, but the huge pink building itself is a sight to behold and you should definitely check it out in all its glory… I mean they even have branded beach umbrellas that look like something out of the roaring twenties! 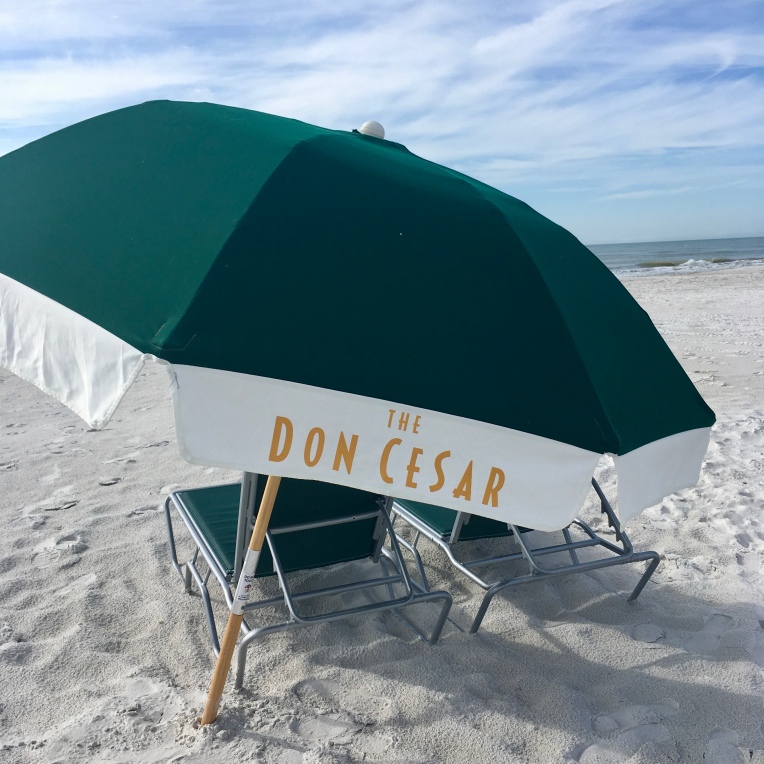 Chill has some kick ass early bird specials and they have deals on food and drinks every single day. The street that the restaurant sits on is pretty quiet, traffic wise, so I would definitely recommend sitting out on their terrace. The spinach lasagna was delicious, but their lemon hummus was literally sent from the heavens. So good. The staff here were so friendly and helpful and I would definitely recommend it for a relaxing place to grab a late lunch or early dinner.

Mastry’s have their bar in the same building as their brewery and they have a large number of their beers on tap at any one time. We tried some strong dark ales, – Night Drive and Not That Heavy, Bro – a stout – Duchess – and a much lighter hibiscus sour – Sawa’. All were flavourful and super enjoyable!

A much quieter beach than St. Pete, but just as beautiful. I actually preferred this beach as it’s much wider so you feel as though there is far more space between the town behind and the sea. The views are beautiful and there are sand dunes too. Treasure Island beach also has a malecón (beachside/coastal path) too, so you can walk or cycle along enjoying the scenery without getting sandy feet! I think that this is definitely the beach to come to if you want to relax a little more. 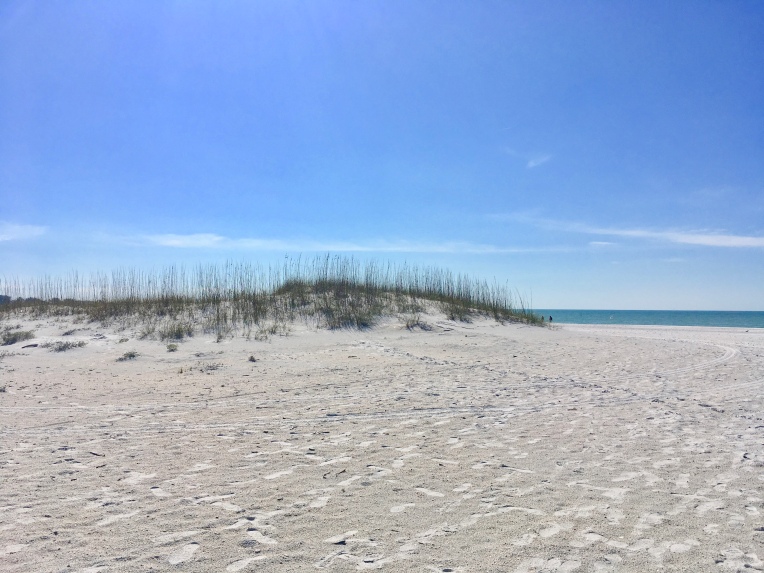 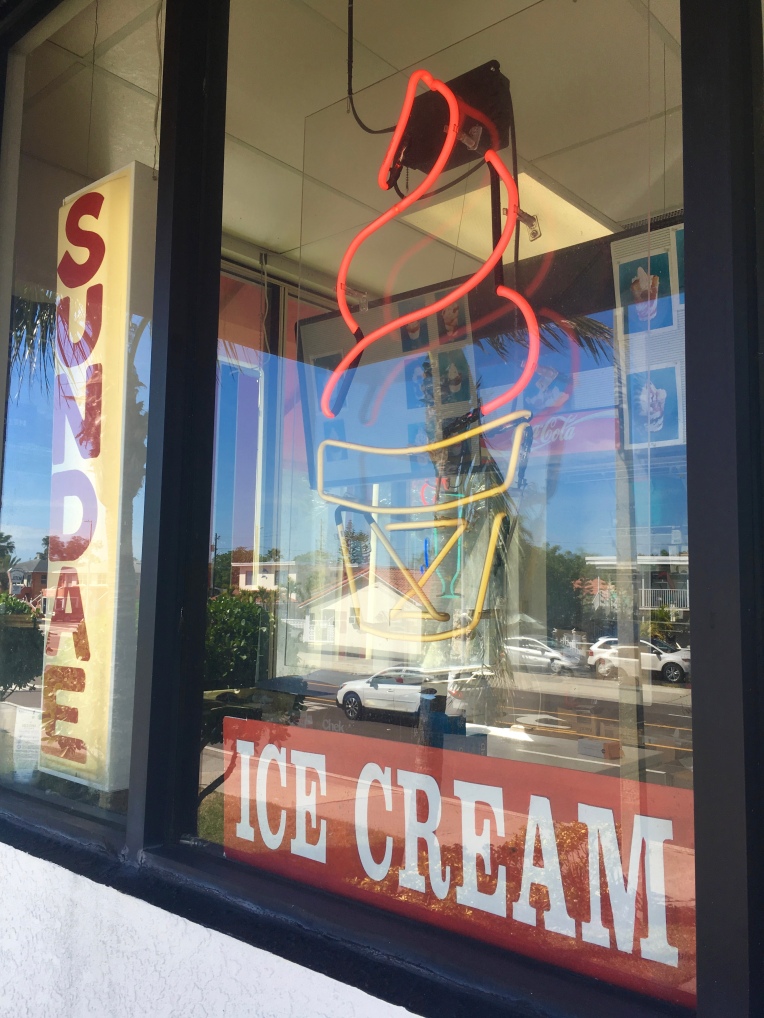 Shake Shop is on the main boulevard only a block from the start of the malecón. It’s a small space, with a table outside the window serving up their delicious ice creams and milkshakes. If you go, then I highly recommend the mint choc chip milkshake. So thick, creamy, delicious and it didn’t taste like toothpaste in any way (I’ve had some bad experiences elsewhere…). I loved the traditional style and old fashioned signs, and you can tell that they know what they’re doing when it comes to serving up ice cream sundaes. Perfect for those warm sunny beach days.

Note: They serve their items in plastic cups but there was no recycling bin that I could see, so I advise holding onto your cups until you find somewhere where you can recycle, or goodness knows what happens to all that plastic.

Getting There: Both St Petersburg/Clearwater and Tampa have international airports that you can fly to which are the closest to St Pete Beach. However, we had a return to Orlando already booked in so we hired a car for around $20 a day and drove out there (1hr 30 mins – 2hours).

Transportation: Having a car was very useful for us to be able to explore the islands in the short time we had, but if you plan to stay in one area then there are many places you can hire bikes from.

One thought on “My Guide to St. Pete Beach, Florida”