Ica is the main area in Peru for distilling pisco, the national spirit.

Pisco is made in a similar way to some types of brandy, but the final product is clear instead of dark. The grape juice is first fermented until it becomes a young wine. This means pisco is actually made from wine, not from the leftovers of wine production. After the fermentation has taken place, it is distilled and then rested in an odourless, non-reactive container (no wood) for a minimum of three months until it can be bottled. Pisco production is very strictly regulated and each producer must follow these same rules.

Pisco is absolutely delicious, especially when you buy it from a great producer.

For me La Caravedo is the best. They produce Pisco Porton (alongside another pisco brand), which is by far my favourite pisco in the whole of Peru. It is smooth and flavourful and an absolute joy to drink either neat or in a mixed drink, like a Pisco Sour or a Chilcano. 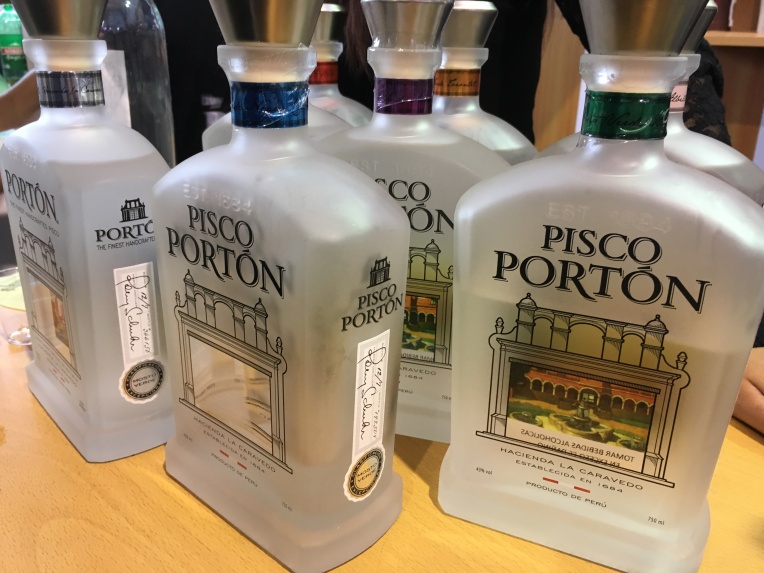 When we arrived in Ica we called to make an appointment to visit. You can probably organise a tour through your hotel (Las Dunas have tours to this vineyard) or a company, but we called directly and managed to have a private tour of the estate! (Check out the contact details at the end of this post if you would prefer to organise a tour with them yourselves.) 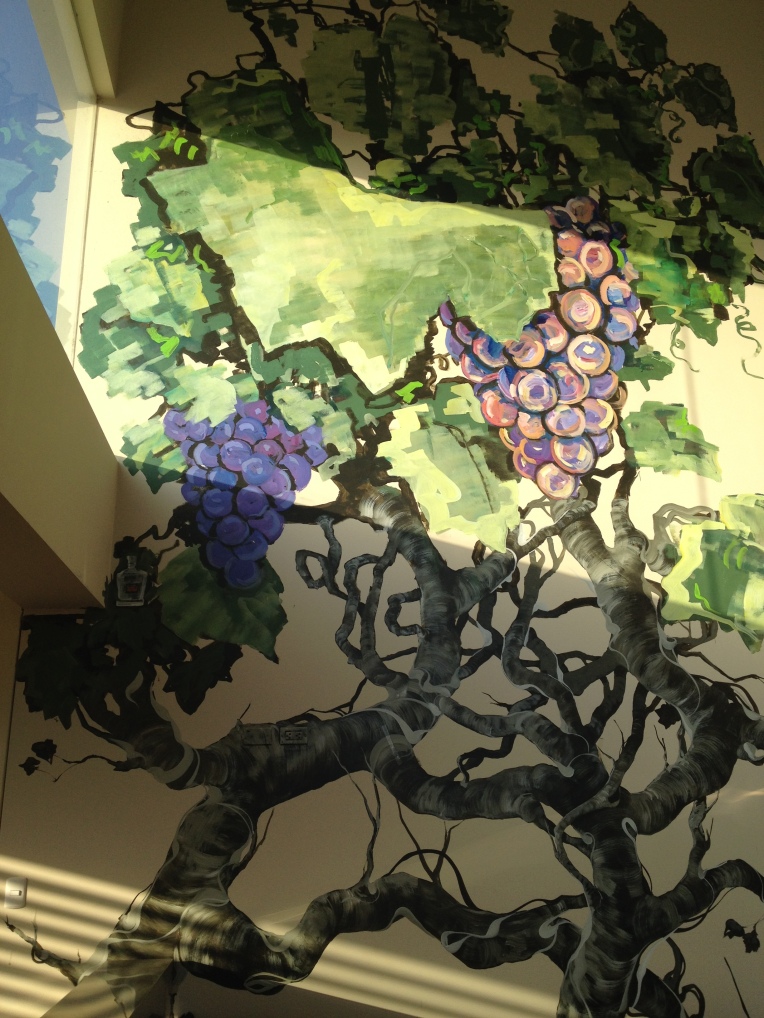 La Caravedo is the oldest distillery in the Americas and was established in 1684, however Pisco Porton has only been made since 2011.

Fun fact: The real gate, immortalised on the front of the Porton bottle, has been standing at the hacienda, if I remember correctly, since the original days of the distillery. 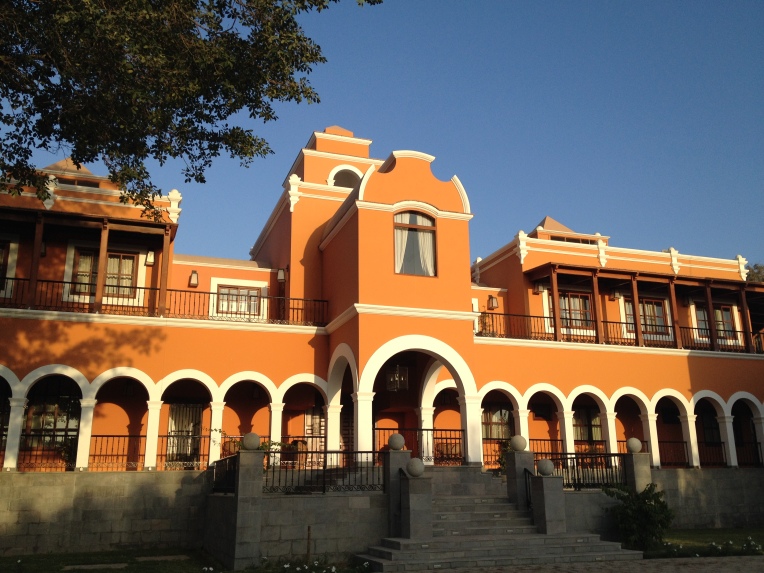 The house illustration however was not and actually the drawing on the bottle came first and the house was built to mirror the bottle! 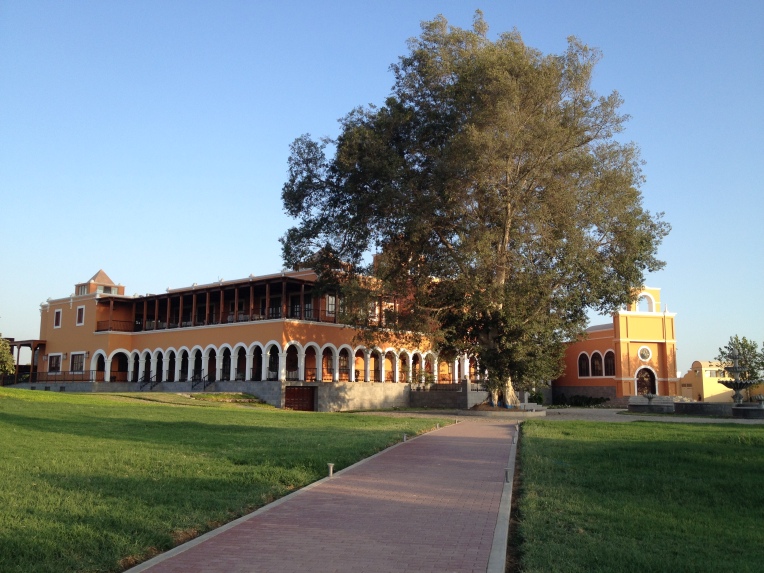 The pisco they produce is rested for a minimum of 1 year before it is finally bottled, which is much longer than the approved minimum resting time, making for a better pisco.

All the pisco they produce is completely pure without the addition of any sugars or even water, which is how the pisco production in Peru is regulated. The pisco must be distilled to proof and contain nothing but uncontaminated and unflavoured grape juice!

La Caravedo use a mixture of ancient and modern techniques to create their pisco, and they use this amazing ancient press to squash the juice from the grapes. 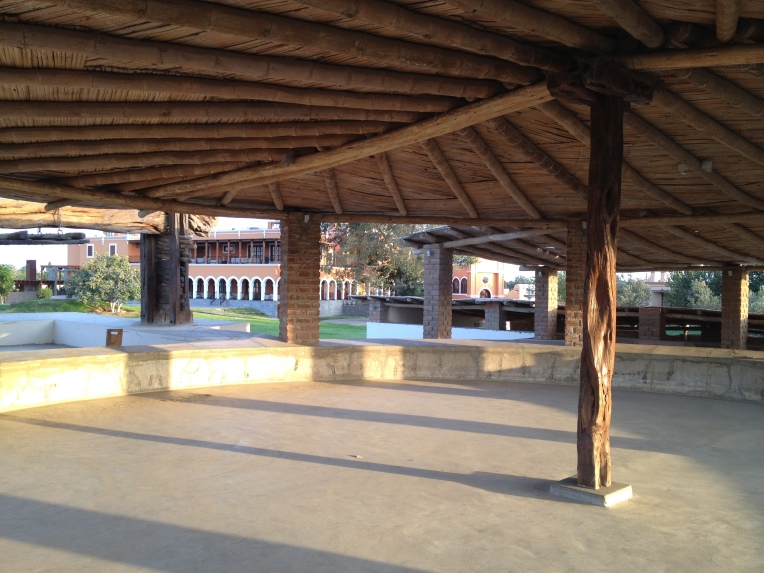 Once it’s been pressed it runs straight down into the multiple concrete containers waiting to be filled full of that delicious grape juice.

They ferment their pisco in these large concrete containers outside under the cover of a wooden roof. Outdoors the fermentation happens easily in the warm environment, however the roof and good ventilation mean the temperature is controlled and the juice never gets too hot.

Just look at the amazing view from the press over the vineyard.

That fancy looking building houses the modern side of the pisco production.

La Caravedo use these huge copper stills to distill the pisco. 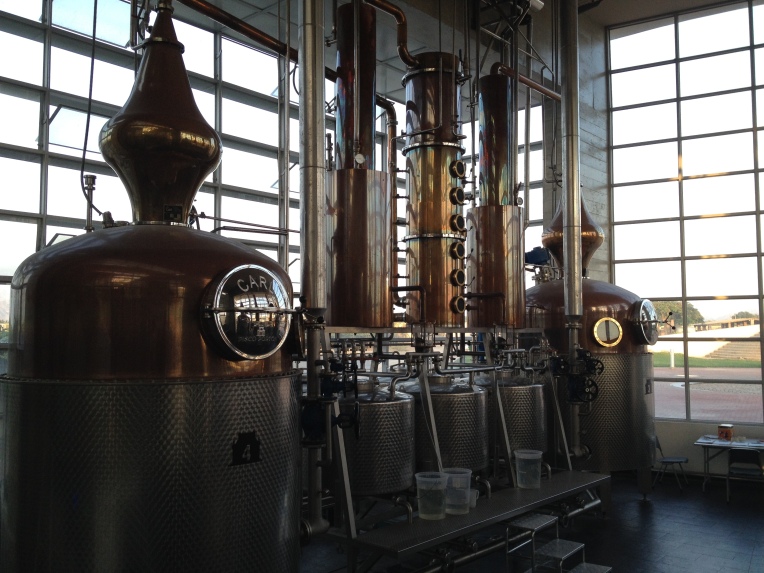 However they do have a more traditional copper distilling system outside in the grounds, which is still used.

You can see the channels that run from the filtration tanks alongside the pathways to reach it.

After distillation the pisco is stored in ‘cubas de guardian’ (basically huge concrete containers) until it’s ready for filtering and bottling.

There are also stainless steel resting tanks where the pisco is stored after the concrete tanks. Either the concrete or the steel tanks have a special filter which removes any copper left over from the distillation, but I can’t remember which!! Either way, be sure to know that there is no copper remaining in the final product.

We were lucky enough to be able to taste the pisco straight from the resting tanks, which was absolutely incredible. 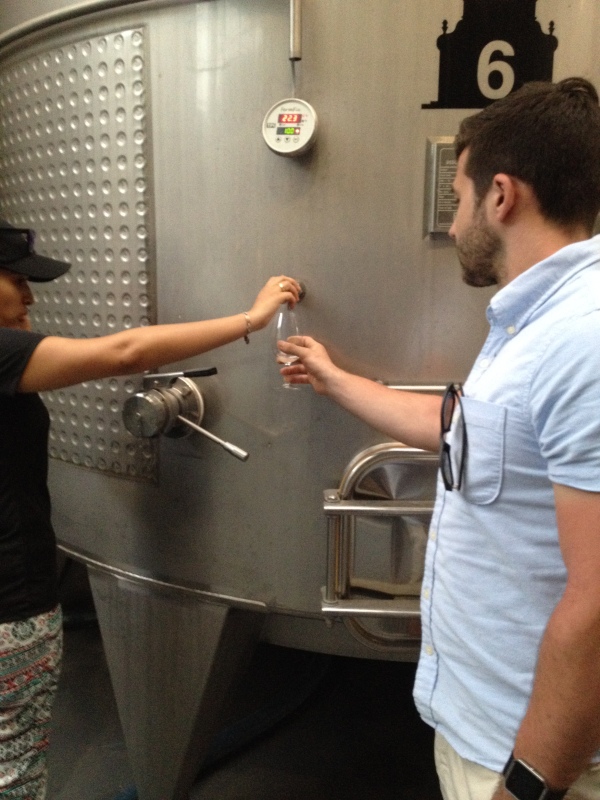 A couple of favourites of ours were the Mosto Verde Negra Criolla and the Mosto Verde Mollar (which is made in a very small batch). Negra Criollo and Mollar are the names of the grapes used in the production of each kind and both have different flavour profiles. In fact there are 8 types of grapes you can use in pisco production; 4 non-aromatic grapes (the 2 mentioned above plus Uvina and Quebranta) and 4 aromatic grapes (Moscatel, Torontel, Italia and Abilla). 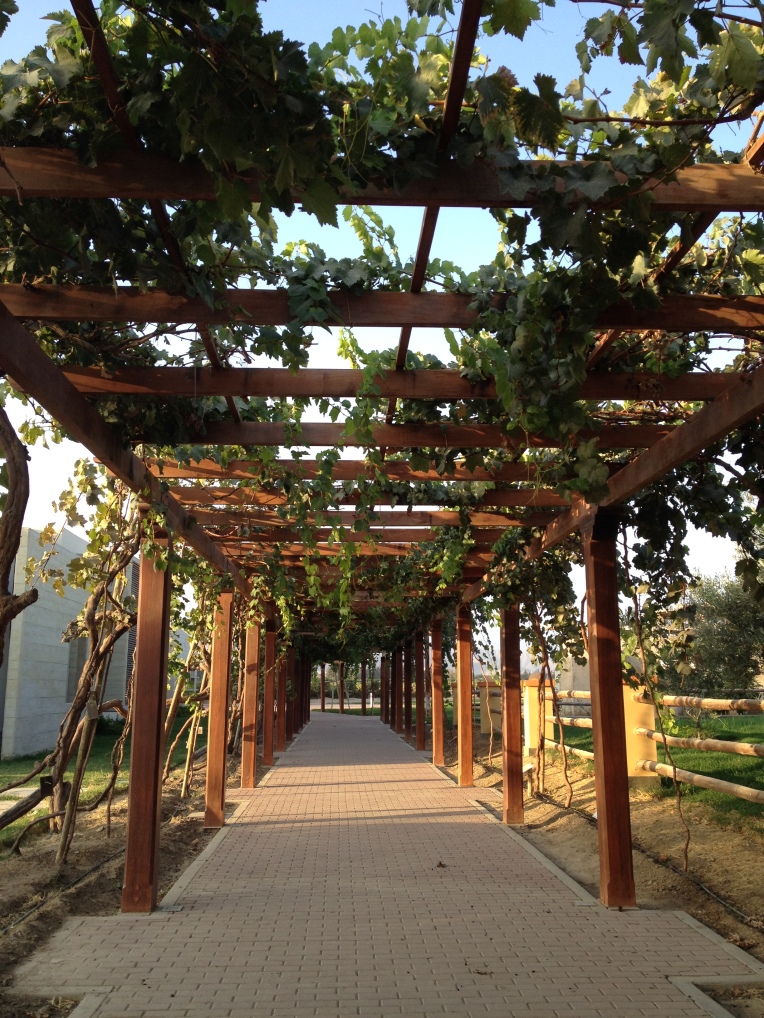 Most Verde pisco is made in a slightly different way to pisco Puro. The fermentation process is stopped before the sugars in the fruit have been completely dissolved, which gives this style of pisco a smoother finish, and because of this, the Mosto Verde is a higher quality pisco. This quality also comes from the fact that it takes more grapes per litre and more work to produce it. It’s definitely better to have a Mosto Verde pisco if you are going to drink it neat.

After our tasting we headed to the shop to make some purchases. I would highly recommend doing this as it is far cheaper to buy from them than in the supermarkets. You can also buy branded glassware too! 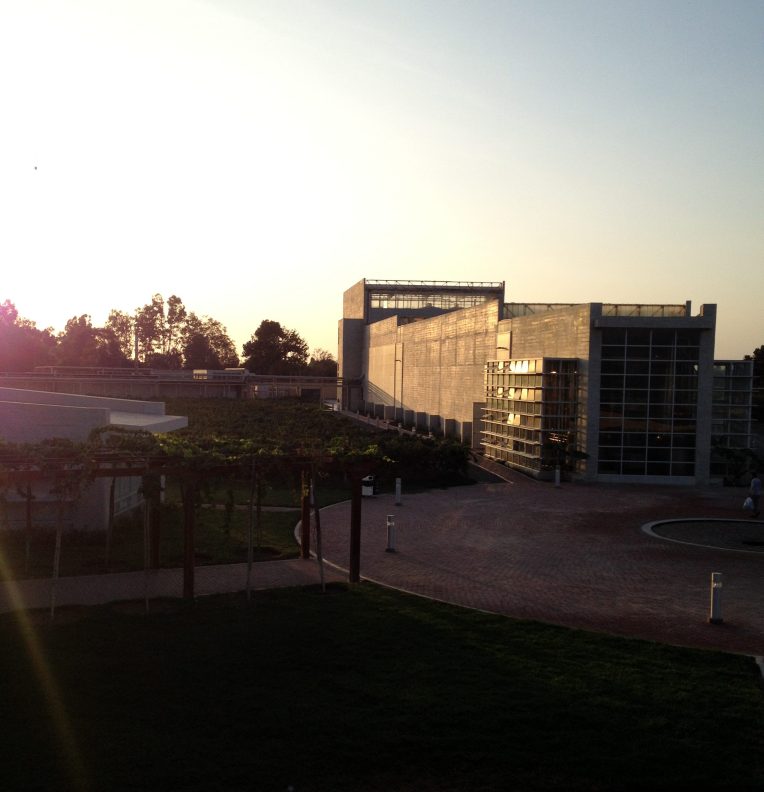 La Caravedo is trying to be as eco friendly as possible, and they do this in a few different ways. This includes building a roof garden to offset the natural carbon dioxide emissions that occur during fermentation. Plus they also reuse recycled water from the distillation process (used for cooling the pisco not added to the product) to irrigate the vineyards.

We had a fabulous time visiting the vineyard and seeing exactly how their pisco is made, especially because they make such fantastic pisco.

🐰🌸Happy Easter! I plan to eat a lot of chocolate today and enjoy some garden socialising in the sunshine. I’ll also be scoffing these mini German Chocolate style cupcakes too - don’t you think the topping is just perfect to make a little nest for a mini egg! I’ll hopefully have the recipe up later today.... and they’re even gluten-free!!
🇬🇧 What a perfect spot to enjoy the spring sunshine....
🇵🇪 Missing my Peruvian family so much and it’s been way longer than any of us thought it would be. Roll on international travel in May!! I’m also missing the little princess of the house, who always keeps me company when I’m home alone - hopefully 2021 will reunite us all! 🐶 🌿
🌼 Springtime @wimpole_estate_nt means daffodils galore and these frilly, peachy ones were definitely one of my favourites! @nationaltrust @eastofenglandnt 🌿
Who’s looking forward to getting back into the garden with a few friends or family from Monday? Whatever the weather, I think outdoor dining is going to surge here in England!! I love a garden party, even if it’s a mini one - this one was from Lockdown 1 when I was still in Lima and we had a little garden party just for us 🌿🍰
🌸 Spring has finally arrived! Living most of the past 9 years in a desert really makes me appreciate the English springtime and all of the flowers that decorate the landscape at this time of year.🌿
🌸 Happy International Women’s Day! There are so many women who do so many wonderful things around the world - creating vaccines, running countries, raising children, exploring, teaching, running businesses, and so much more. We’re all on our own journey and each one is equally important, so always support and build up the women in your life, whatever their choices may be!! You can do anything you put your mind to and be anything you want to be 🌸
🇯🇵Day 21 of #japanuary - TEMPLES & SHRINES. Togo Shrine in Harajuku was such a beautiful surprise. It’s tucked away behind the extra busy shopping street of Takeshita Dori, but you’d never know. It’s such a peaceful spot, with a koi pond and lush greenery surrounding one of the entrances. The integration of places like this within an urban environment is one of the reasons why Tokyo is such a great city. (Full list of japanuary topics can be found @cakeswithfaces) 🌿
I’m so behind with my days 🤦‍♀️ but.... Day 20 of #japanuary (by @cakeswithfaces) is DAY TRIPS.
<span>%d</span> bloggers like this: