There is an amazing sight to behold in the Colca Valley. 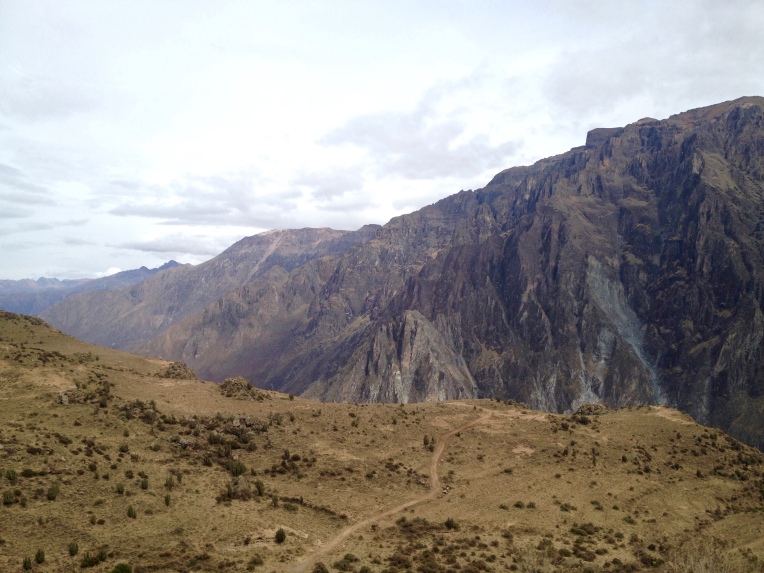 Aside from the incredible landscapes, there is something else to steal your gaze.

They glide in the distance silently; sometimes alone and sometimes with friends.

They are wonderfully majestic creatures and they are so beautiful to watch just swooping and soaring in front of you and overhead. 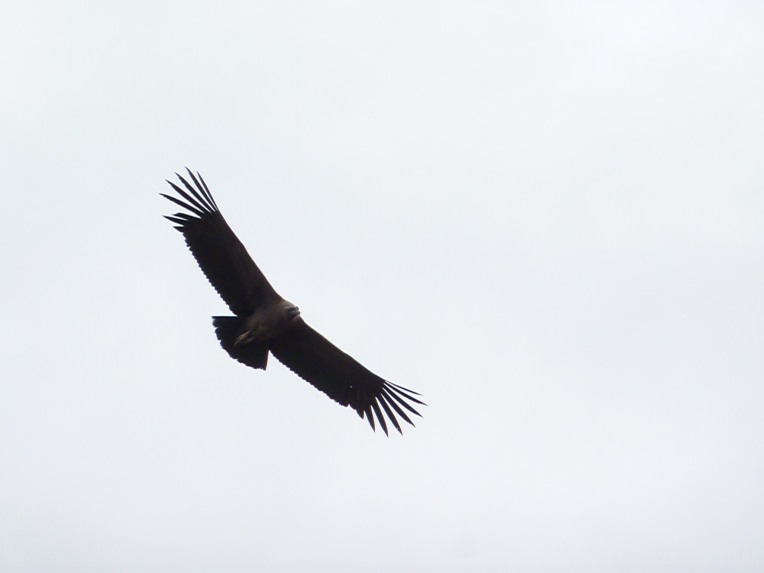 Their vast wingspan makes it one of the largest birds to have ever graced this planet, and apparently it’s only second to the Wandering Albatross (which luckily enough I saw on a trip to New Zealand at the age of 12).

They save their energy by roosting high up in the mountains and then using the air currents to glide as opposed to flapping their wings to fly. 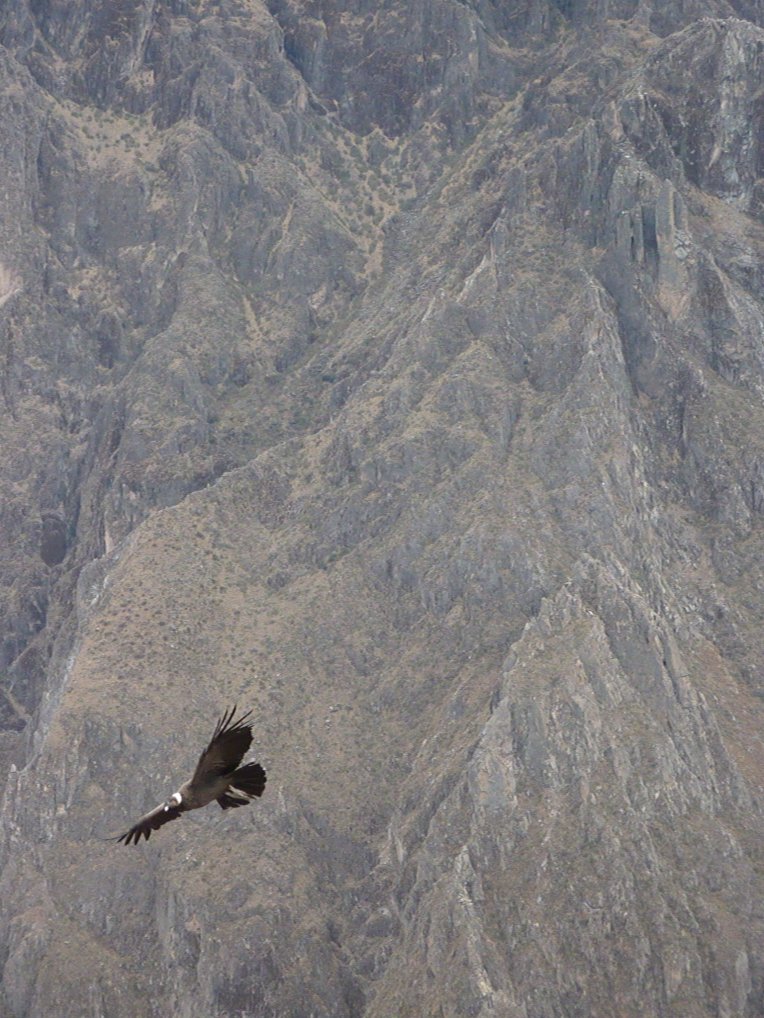 That is what makes them so graceful in flight.

We managed to see a mixture of adults and young birds, and you can tell the difference between them by the colour of their feathers.

The young ones appear more brown (on the right) whereas the adults are black with sections of white on the wings and around the neck (on the left). I also learned that they can live up to 70 years old which is astonishing!

I never realised what an incredible experience this would be until I was standing on the edge of the Colca Canyon at the Cruz del Condor (Condor Cross) staring down the canyon and catching my first glimpse of these incredible birds.

Can you spot the two condors flying together right in the middle..?

An hour simply whizzes by as you stand and watch in awe as these huge birds glide overhead, trying to capture as many moments on film as possible, whilst still taking in some of the magic with your own eyes. 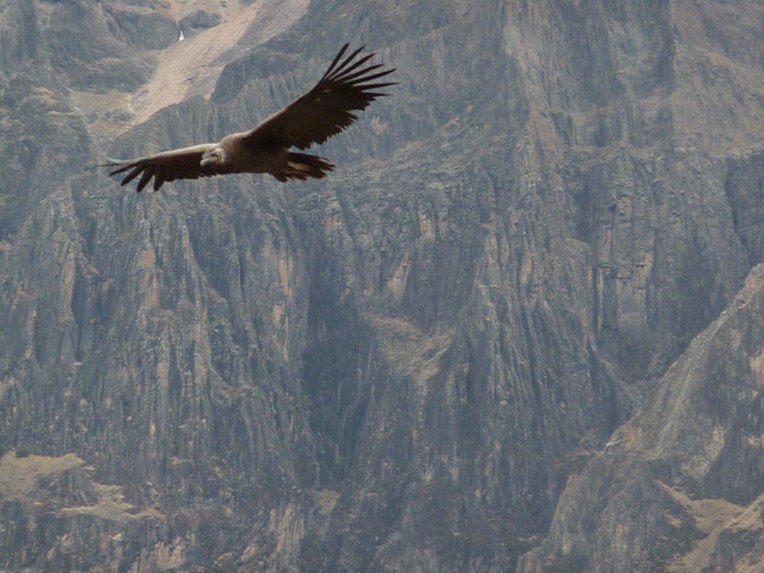 Sometimes the beauty of nature can astound you and you realise how lucky you are to have been in the position to observe this. 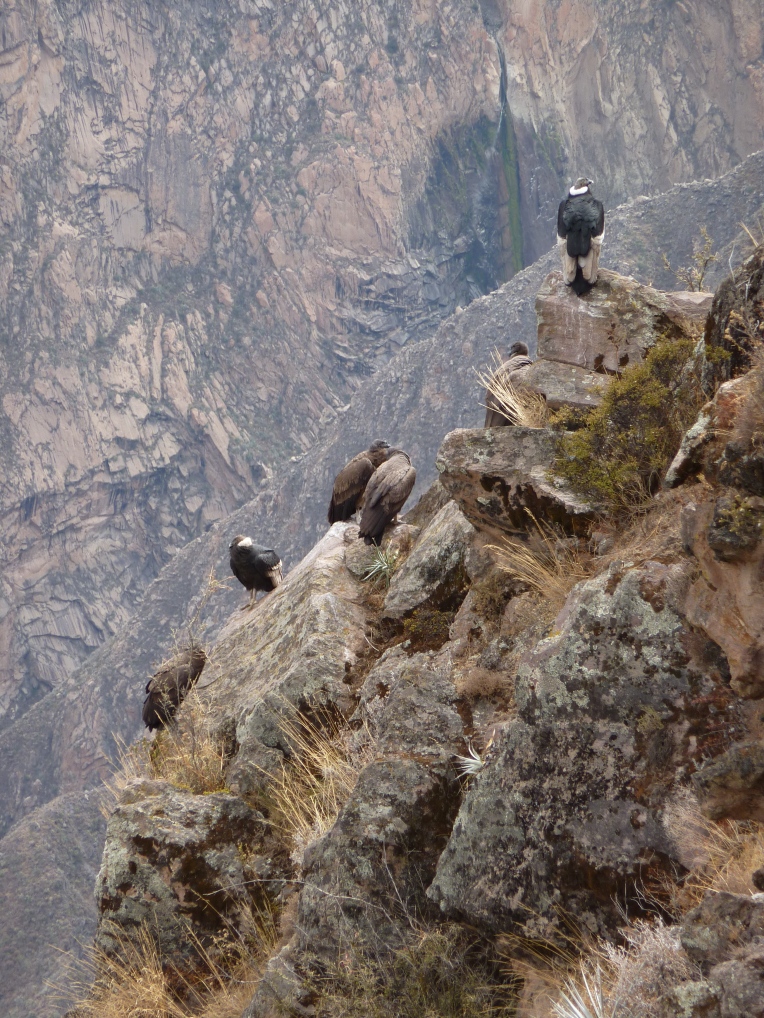 Sadly they are a threatened species and are very rare in parts of South America. Fortunately, however, there have been measures taken to increase their numbers in the wild. If you do come, you will count yourself as one of the lucky ones to have seen them in all their glory.

Some people travel all this way and come away having seen nothing, so do check the best times of year for viewing them before booking your trip.

However, as luck would have it, we managed to see around 14 birds at one time and so we probably witnessed more than 20 birds over the period of time we were stood there (check out the group of them on the far left!).

I recommend getting there early in the morning and staying for as long as you can. Avoid rainy days and make the time to come back again if you can so that you have double the chance.

It is so worth it.

I promise you that.

Also, take a good camera if you have one. I only have a point-and-shoot and although I captured a few good shots, it took me a long while to get them. It does have a good zoom though, so I’ll give it bonus points for that! 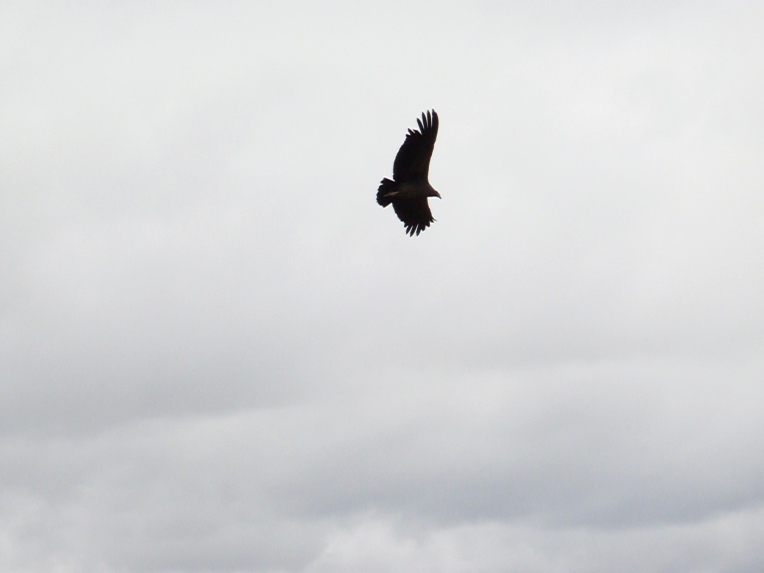 I did use my iPhone on occasion though as it captured some good in flight action. It’s so hard to capture the gracefulness of these birds with just a photo, which is where film comes in to its own.

Hopefully this will give you an idea of the kind of experience you can have watching them.

Some footage of the beautiful condors in flight. A spectacular sight. #Colca #Arequipa #Peru pic.twitter.com/dr0jkWjhWg

If you do plan on coming to Peru and visiting Arequipa, definitely make some time to see this incredible place.. ..including these magnificent birds that were so highly revered by many different Peruvian cultures before, and including, the Incas.

After a while the condors moved on and the rainclouds drew in, and so we left our perch and set off for a walk before the rain poured down.

The clouds turned the mountains into even more of a dramatic backdrop for our walk.

As the rain started to pour we jumped into our bus and headed off. 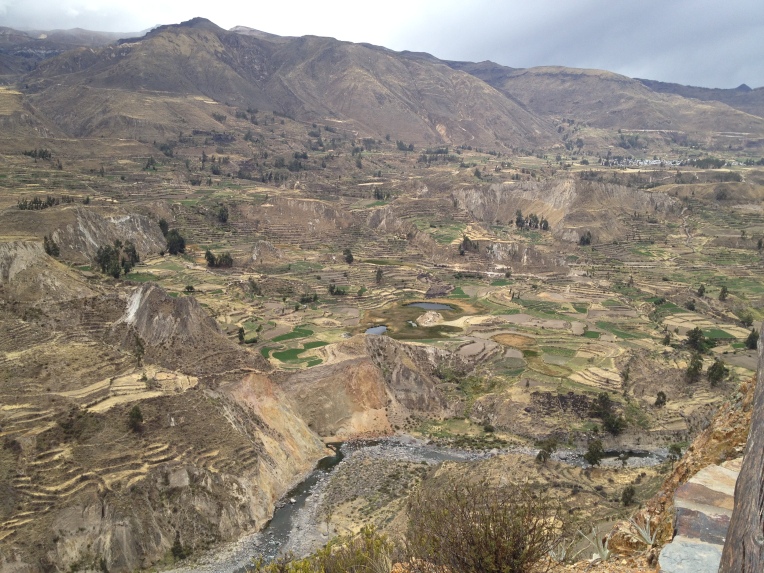 The rocky canyon turned back into patchworks of greens and browns and rocks of burnt orange as we headed back into the Valley. 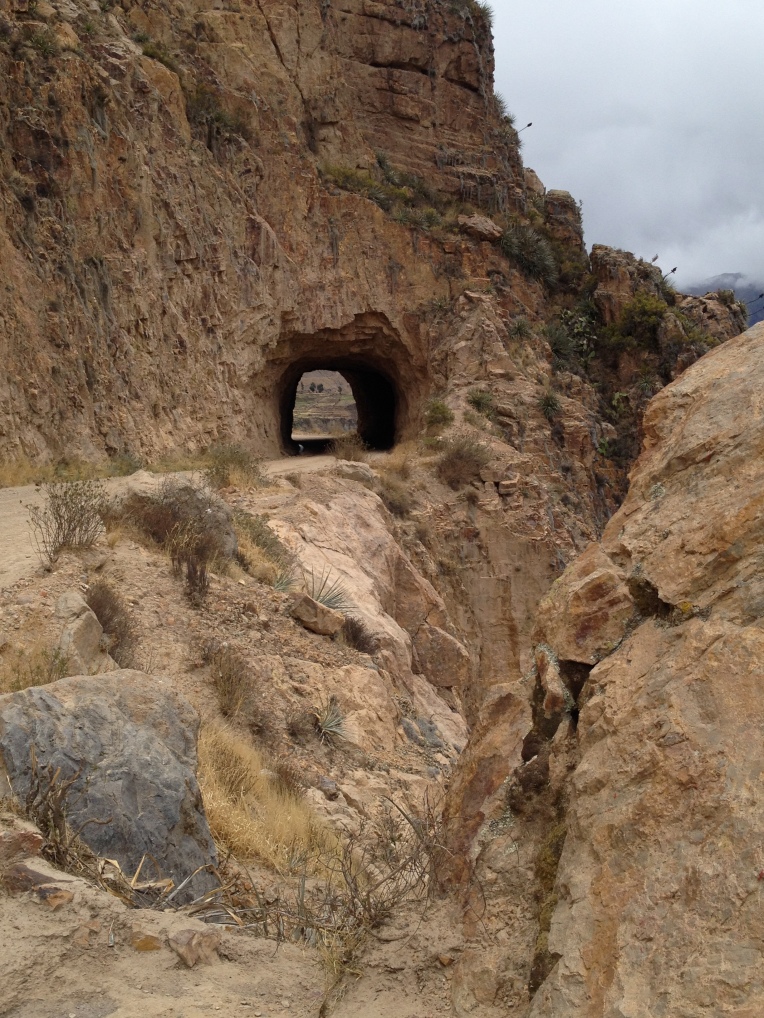 After a few photo stops it was back to the Lodge for lunch outdoors. OK, well not quite outdoors!

The sound of the thunder and the rain was extremely relaxing as we sipped on pisco sours and ate a trio of barbecued meats and vegetables. It gave a whole other dimension to our surroundings, which now felt much more enclosed with the low grey clouds covering us.

The view was spectacular. 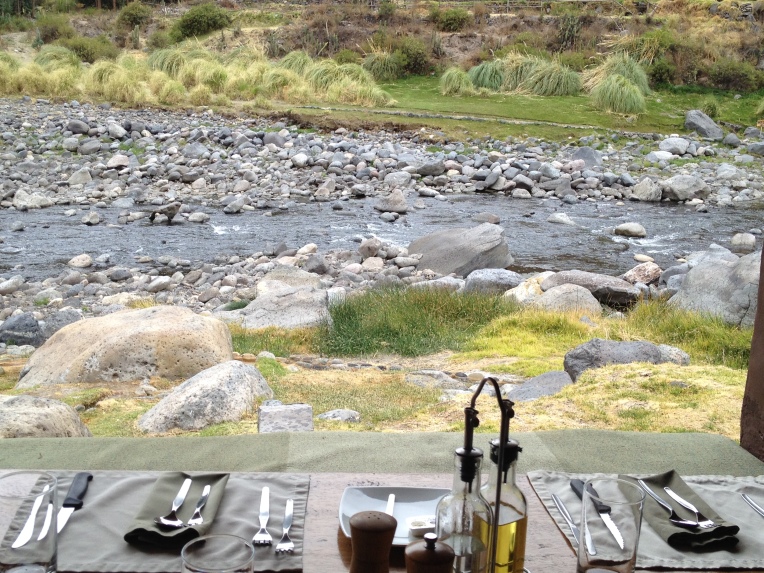 I love to watch and listen to the rain and the thunder from the comfort of a dry, safe spot!

However, the rain didn’t stop me from having another dip in the natural hot pools after lunch, and I had one all to myself as not many others wanted to venture out in the heavy downpour.

And there, relaxing in the warm water, I enjoyed the stunning vista and the sound of the rain making little ripples all around me.

2 thoughts on “Arequipa // Flight of the Condor”

🌿 Happy Bank Holiday weekend! I’m missing the gorgeous bougainvillea in our garden in Lima at the moment, but the apple blossom is coming out on our trees here in England and it’s looking so beautiful. I hope you all enjoy whatever garden parties/gatherings you have planned tomorrow! 🌸
🌿Happy Earth Day! The world is such a beautiful place, full of wonder and magic, so let’s make sure it stays that way. Not only for us, but for everyone who comes after us too 🌱
My favourite kind of treat, whatever the weather! @gelatojack is one of my favourite places to go when I’m need of a pick me up. Where’s your ‘go to’ local foodie spot?🍦
🐰🌸Happy Easter! I plan to eat a lot of chocolate today and enjoy some garden socialising in the sunshine. I’ll also be scoffing these mini German Chocolate style cupcakes too - don’t you think the topping is just perfect to make a little nest for a mini egg! I’ll hopefully have the recipe up later today.... and they’re even gluten-free!!
🇬🇧 What a perfect spot to enjoy the spring sunshine....
🇵🇪 Missing my Peruvian family so much and it’s been way longer than any of us thought it would be. Roll on international travel in May!! I’m also missing the little princess of the house, who always keeps me company when I’m home alone - hopefully 2021 will reunite us all! 🐶 🌿
🌼 Springtime @wimpole_estate_nt means daffodils galore and these frilly, peachy ones were definitely one of my favourites! @nationaltrust @eastofenglandnt 🌿
Who’s looking forward to getting back into the garden with a few friends or family from Monday? Whatever the weather, I think outdoor dining is going to surge here in England!! I love a garden party, even if it’s a mini one - this one was from Lockdown 1 when I was still in Lima and we had a little garden party just for us 🌿🍰
🌸 Spring has finally arrived! Living most of the past 9 years in a desert really makes me appreciate the English springtime and all of the flowers that decorate the landscape at this time of year.🌿
%d bloggers like this: