Seeing as the blog is taking a trip across the ocean and back to my homeland of Britain, I thought it only right to make my first post a Peruvian one.

Virgilio Martinez is a well known Peruvian chef and opened an extremely successful restaurant here in Lima called Central, which is currently ranked at number 15 in the world and number 1 in Latin America. Fortunately for the UK, he took his skills to London and opened Lima which has also been a huge success and has even received a highly coveted Michelin Star. Lima has been so successful in London that Virgilio recently opened a second restaurant in Covent Garden called Lima Floral.

I was lucky enough in December last year to be able to visit the original Lima restaurant, just off of Oxford Street in the heart of London (thanks Dad!!)

Even though the restaurant is situated in one of the busiest parts of London, you wouldn’t know it. It’s location down a little side street makes it a perfect hiding place from the hustle and bustle of the Oxford Street shoppers. (Apologies for the blurry photo but I was pretty cold when I took it!)

The restaurant itself isn’t huge but it isn’t tiny either, with 2 floors of space to sit (although when we went, only the first floor was open for customers).

The decor is a mix of modern and traditional, with Peruvian flourishes. I absolutely loved the dining service; a mixture of different styles of stoneware plates and bowls in different colours. Some of the plates I think were from Habitat (love that store), but they could have come straight from South America. 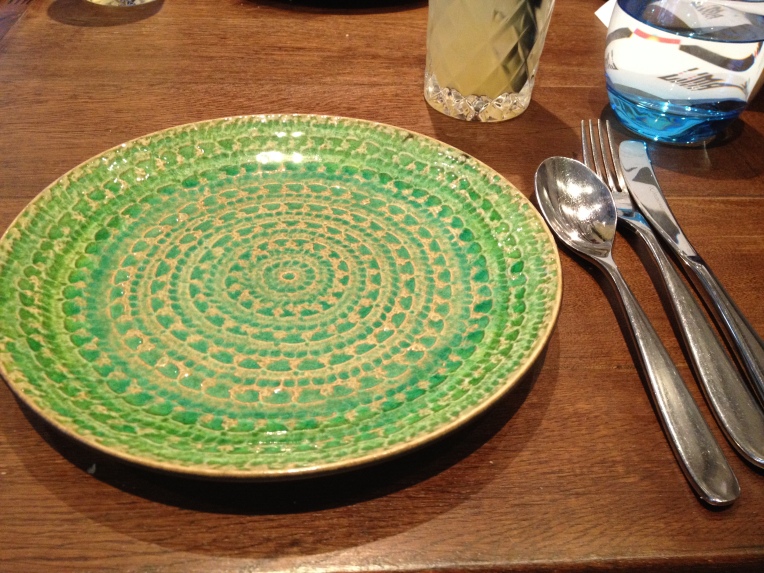 I also loved the wooden trunks that covered the window, giving you a sense of nature and all things natural, which I believe was reflected in the food too. This design and use of the wood is apparent in Lima too, and I’ve seen it used in many cafes and restaurants by the beach. 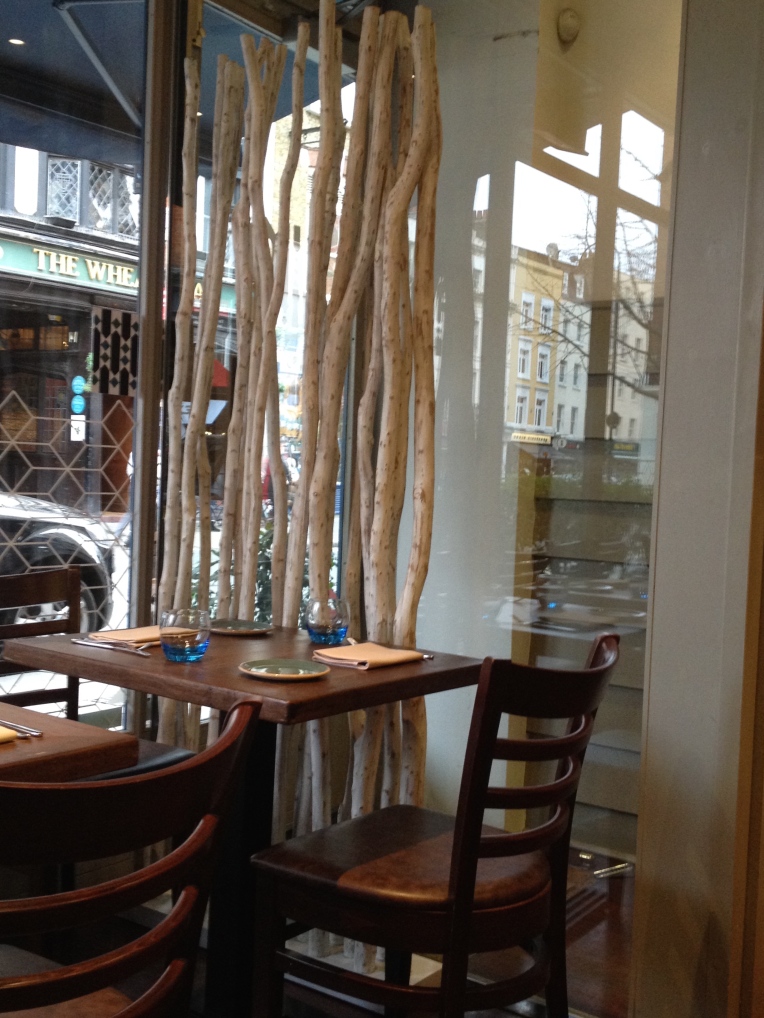 We hadn’t booked, but luckily there was a little table for us in the front of the restaurant, and we were attended on by the Maître d’, which was perfect for us, as it allowed us to talk to him throughout the meal about the different ingredients used and his experiences of Peruvian cooking.

We ended up having the absolute best time, but I would definitely recommend booking first. We were very lucky with our table, but the rest of the restaurant was absolutely full. If you do want to go, I advise to book ahead of time to avoid disappointment.

We went on a Sunday, because they have a special set menu that contains different starters, main courses and desserts for you and your table to try out. Perfect if you have no idea what you might like to try, or, if like me, you just want to eat everything!

It cost us £35pp at the time and we also had a pisco cocktail included within the price! A bargain for such a well renowned restaurant.

Our pisco punch (a mixture of pisco and fruit juices) was a beautifully fruity cocktail that I literally could have finished there and then, but I restrained myself and held onto it, at least until the main course arrived!

The bread arrived, and then to start we were given a ceviche (raw fish slightly cooked in limón juice), a tiradito (raw fish in a sauce), and some mini causa (mashed yellow potato flavoured with yellow chilli and served with cold meat or fish, in this case – fish).

The ceviche was one of the best ceviches I have ever tasted, in both England and Peru, so that is high praise indeed. 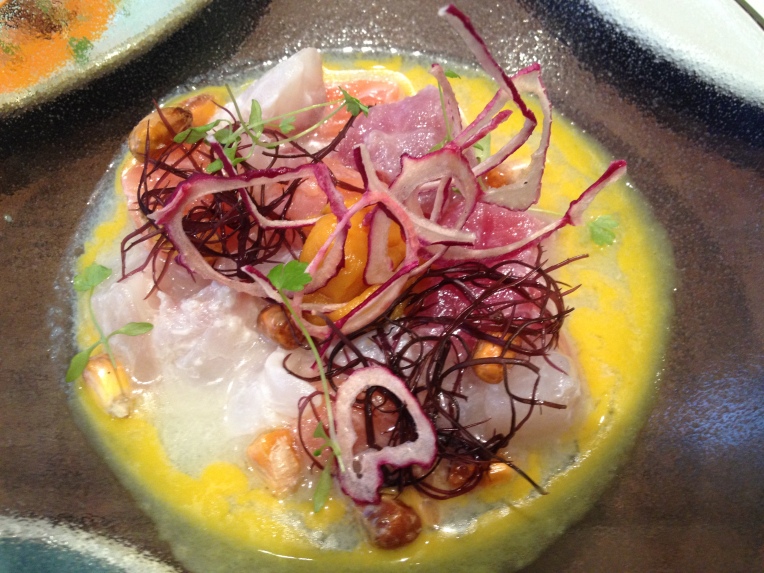 It was a mixed fish ceviche (so I left out the salmon), served in it’s leche de tigre (the sauce that the fish is slightly and slowly cooking in, due to the acidity of the limón juice), with my favourite canchita sprinkled over (fried Peruvian corn) as a garnish. There was also some sweet potato puree (as apposed to the chunk of sweet potato you will normally find served with the ceviches here in Peru), which I thought was a delicious and excellent accompaniment.

The tiradito was purely salmon, which I really don’t like, so after a quick taste I left this one for my Dad to happily finish!

He loved it, so I can only assume that it was excellent too, although I don’t believe anything could have beaten the quality of that ceviche!

The causa came with a tuna tartar and was served as little cylinders of the yellow potato with the tuna sat on top.

These were delicious little mouthfuls, and they came served with an asparagus sauce that just accompanied it beautifully.

All 3 starters were just so fresh and had so much flavour. A great start to the meal.

The meats came in little portions of one each, and were comprised of chicken in a pachamanca sauce, a sweet and juicy pork, and some braised lamb in a chilli sauce. All were very tasty, especially the pork, but I found either the chicken or the lamb to be a little too spicy for me (although I am a wimp when it comes to heat in food). I can’t honestly remember which meat it was that was too spicy though, as the trip was around 5 months ago now! All I remember is that I just wanted more and more pork!

We had a slight problem with our chicken being undercooked, but they whisked it away and brought us back a whole new plate of meat including more pork and lamb! Sadly it was more than we could handle, just the two of us, so we had to leave a little to go back to the kitchen.

The sides to accompany the meat were slightly different to what the menu had suggested and consisted of dried potatoes, arroz chaufa (Chinese style fried rice), vegetables, chinese leaves (I think pak choy or bok choy) and red quinoa (a popular Peruvian grain).

I personally really dislike dried potatoes, but my Dad really enjoyed them and their slightly smokey flavour. Believe me, they are unlike anything you will have ever tried before, so give them a go and see what you think!

The arroz chaufa was amazing, and completely represented this specific style of Chinese rice here in Peru. The quinoa was beautifully cooked, and the vegetables were so flavourful and full of colour. It was such a brilliantly balanced main meal, but I could have eaten bowls and bowls of the arroz chaufa! This main course was excellent, and I loved that we were able to try so many options in one dish.

We also had a plate of papa a la huancaina but in a very minimalistic style, with slices of small potatoes laid alongside little dots of sauce. However, huancaina was not the only sauce on the plate, as it was joined by two other Peruvian sauces too.

This dish was absolutely stunning to look at; a work of art.

It was absolutely delicious too, and so light,  but the huancaina was no way near as good as the huancaina sauce here in Peru. However, the sauce was possibly the only misstep in the whole meal!

Lastly, but by no means least, the desserts were delivered. A trio of traditional Peruvian flavours.

Starting from the left, the first dessert was made from purple corn and kiwicha (a Peruvian grain). It was essentially a jelly which tasted a little like chicha (a Peruvian drink made from purple corn, fruits and spices), which meant it had a great flavour. Having grains in a jelly was a little weird sounding, but it actually worked really well, making the jelly very interesting.

I have spoken about the alfajor here before, but I have to mention again how utterly exquisite it was. The biscuit just melted in the mouth, and the manjar blanco (dulce de leche, caramel) was so delicious and it did not taste like milk at all (a pet hate of mine!). I can honestly say that this was just a dream alfajor!

The third dessert was a lúcuma ice cream. Lúcuma is a native Peruvian fruit which looks a little like an orange avocado, but does not have the same texture or taste. The flavour is quite caramel-y and unlike anything I had eaten before I first tried it. One of the best ways to serve lucuma is in a dessert so something like an ice cream, mousse or milkshake really helps it to shine.

And shine it did. I love lúcuma ice cream, and here in Peru I’m lucky enough to find amazing options. Although this ice cream didn’t match up to my favourites here in Peru, it was still an excellent ice cream, and I loved having a taste of that beautiful flavour whilst I was in the UK.

I would highly recommend a trip to Lima, and going on a Sunday will allow you to try a range of Peruvian dishes, ingredients and flavours. They may not be the same as the above dishes as I believe the dishes will change due to the seasons, but no matter what there is to try, I’m sure it will be just as fabulous as my meal!