I honestly can’t get enough of it. I love watching the movies, listening to the soundtracks, and best of all, visiting the Disney parks.

I’ve been lucky enough to visit Walt Disney World in Florida 3 times now and to Disneyland Paris twice, and I could visit a million times more. I just love feeling immersed in the world of Disney.

So, Disneyland Park in Paris is, I believe, the biggest ‘castle park’ in terms of square footage and I thought we’d take a wander around to check out the different parts of the park. It’s full of hidden surprises and immersive spaces to just take a walk through – no rides necessary! You can explore inside the castle itself, and under it, and there are huge swathes of green spaces too, especially in the area of the Swiss Family Treehouse. Although if rides are what you’re here for then there are plenty of those too!

Now, we visited during the European heatwave last year so it was well over 30C in the parks at the time. I do not recommend going in that kind of heat because you will literally melt. It was a scorching day and some of the outdoor rides had to be closed because of the temperature, so unfortunately I couldn’t go on everything I wanted to, no matter how much my little Disney loving heart wanted to.

However, we had so much fun despite the high temps, so I want to take you on a walk through the park to explore the different areas there are to be found. There are 4 main lands, plus the castle area, and I might even give you a look at the parade too…..

Sleeping Beauty’s Castle is obviously the central feature of the park and what’s great about this one is that you can actually explore inside it. You can climb the stairs to the second floor, discover so many wonderful thematic details and even head out to the balcony to take a peek over all of Fantasyland. 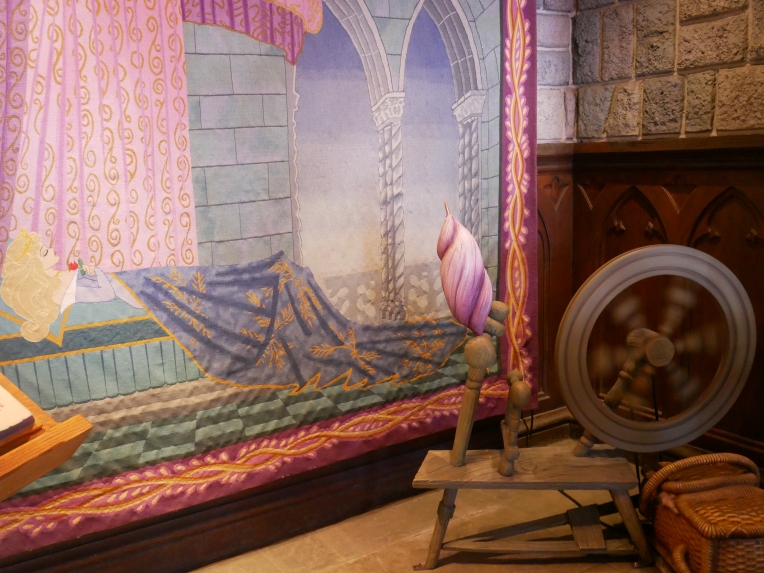 The real treat, however, lies in a cavern under the castle where a full size dragon sleeps inside. So just make sure you don’t make a sound, because if you wake him…… well, you could be in for a surprise. 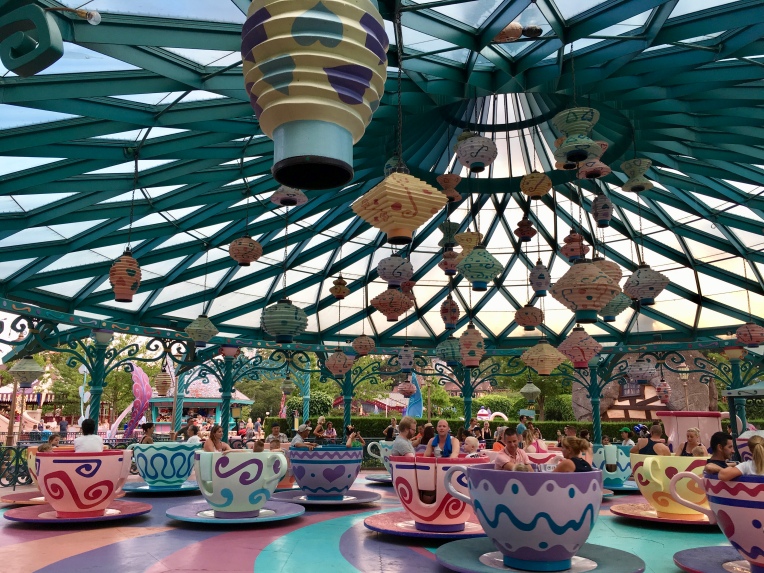 Fantasyland is so brightly coloured and filled with life and I think some of my favourite parts were the ones themed to Alice in Wonderland. Alice’s Curious Labyrinth is a walk through maze filled with familiar faces from the book and film, like the White Rabbit, Cheshire Cat and the Queen herself. If you can find your way and make it up to her castle then you’ll be treated to some amazing views of the park. Just outside the maze is an area set up for the Mad Hatter’s Tea Party and not far off are his teacups for you to ride!

If you want to meet a Princess, Alice or even Mickey himself, then this is definitely the area to spend your time, as there are areas for all of them. The carousel is always fun for a ride, and if you want to escape the heat then the Snow White and the Pinocchio dark rides are a good way to do this. Peter Pan’s Flight is really lovely and even though it’s the same as in WDW, I still love soaring over the scenes from the film, especially mermaid lagoon and the Indian camp. Sadly, the Storybook Boats were closed along with It’s A Small World so no rides this time round. I know that the labyrinth isn’t a ride itself, but it’s honestly such a well themed area, and I highly recommend everyone take a wander through, especially if you loved the film! 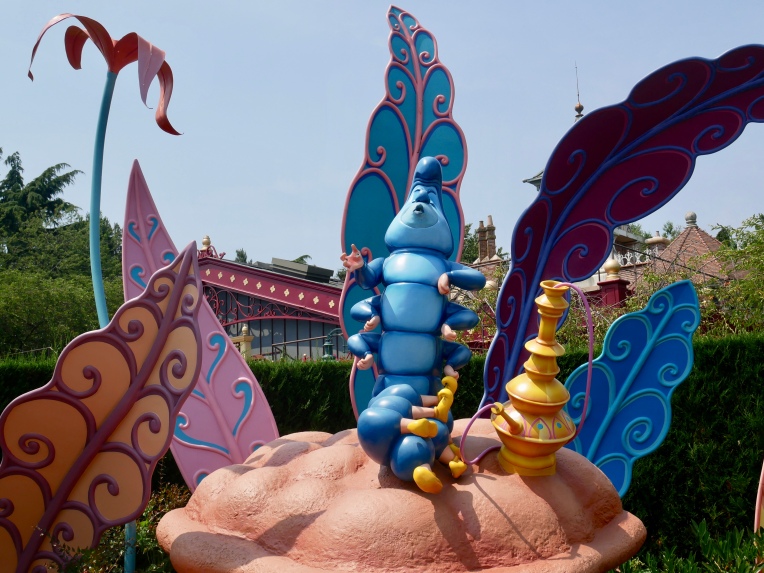 Adventureland is a beautifully themed area all about adventure, exploration, sailing on the high seas to far away islands, or discovering the treasure laden city of Agrabah. Fly to Neverland to meet Peter Pan or one of his friends (or enemies!), discover the pirate ship and even climb inside skull rock itself. Visit the Pirates of the Caribbean ride, and then explore the caverns that supposedly hold a large pile of treasure, but can you find it?

Cross the rope bridge across the water to another section of Adventure Isle filled with lush green trees and plants to visit the Swiss Family Treehouse. See the shipwreck and then discover how the family survived in their very own treehouse!

Indiana Jones has his one attraction here in the form of his rollercoaster ‘The Temple of Peril’, but beware as it does have a loop in (the first Disney coaster to have one), so this one is for thrill seekers and adventurers only!!

If you’d prefer to keep your feet on the ground, head over to Agrabah to meet Aladdin and friends and take a walk through his story in the form of mini sets recreated from the film itself. Also, see if you can find the magic lamp sitting around, although just remember the genie no longer lives there so you can’t get any wishes from it!

This area is probably the most fun to spend your time in, as there is so much to see and do, and such a large area to explore. 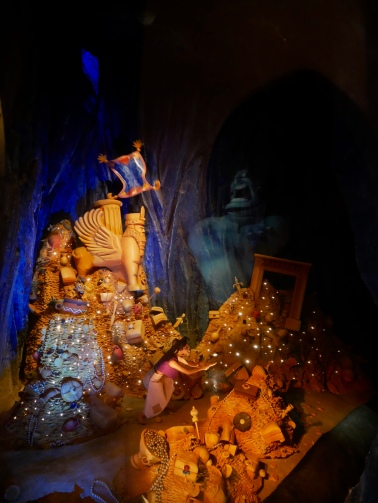 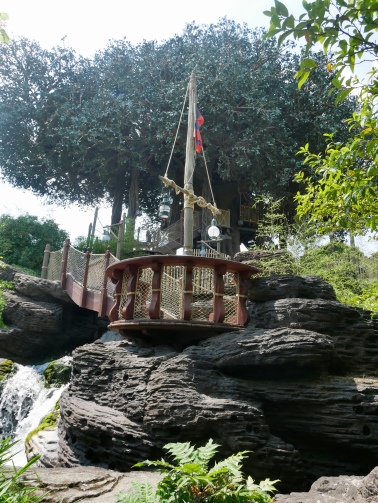 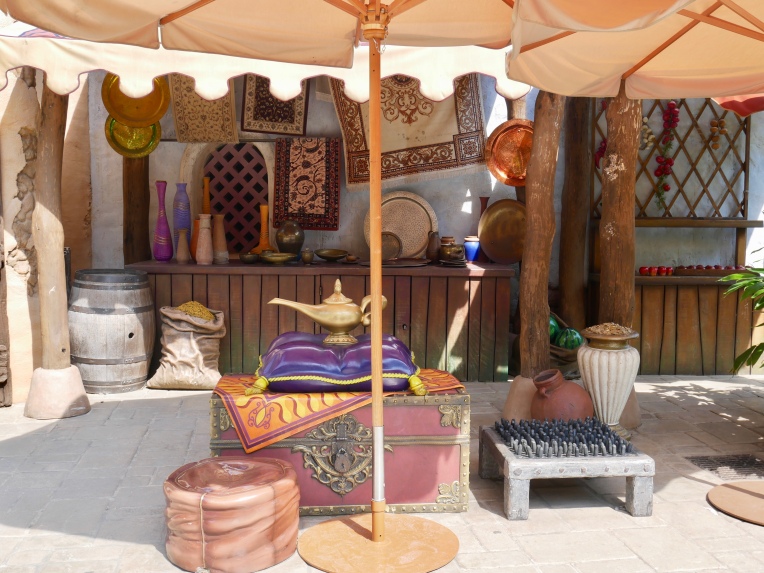 Frontierland seems to have the least attractions but it does have two of the best. Big Thunder Mountain is way better in Paris than in Florida and I loved every second riding this roller coaster. You board your train on the mainland, but you get taken under the water to ride the coaster out on the island in the middle of the lake; it’s awesome. This is hands down one of my favourite rides here.

Phantom Manor is very similar to The Haunted Mansion at WDW but with a different back story. Here, in the town of Thunder Mesa, the mansion was built by a settler who founded a gold mine. Long story short, an earthquake killed him and his wife, leaving their daughter, who was jilted by her fiancé, to sadly wander the mansion for years. It’s a very fun track ride, full of surprises and ghostly happenings.

If you don’t fancy either of these, then the Thunder Mesa riverboat takes leisurely trips around the lake, so you can admire the surroundings without being frightened by ghosts or runaway trains. Although, I recommend you do all three… 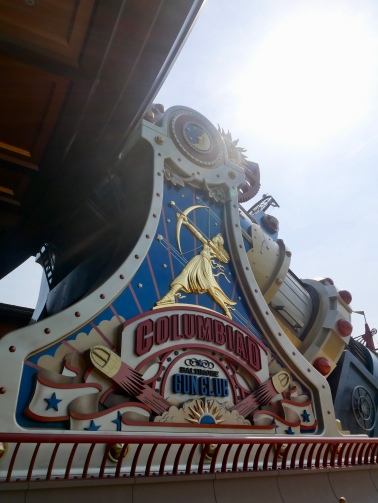 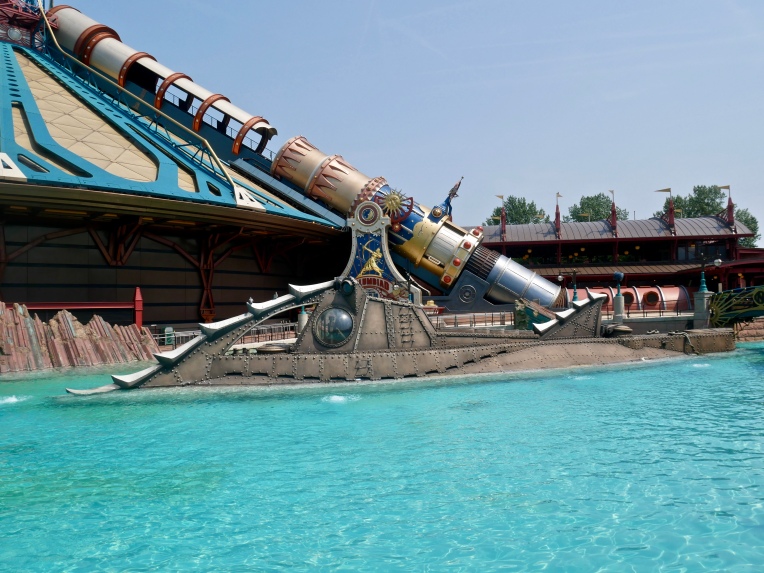 Discoveryland is the future. Part of it is a steam punk style future (with Jules Verne’s Nautilus as an incredible explorable example of this) and the other is more of an updated Star Wars view of the future. Do not miss the Nautilus, because it’s incredible inside. Another incredibly themed walk through, that Disneyland Paris does so well, filled with historic but futuristic items and rooms ready to explore 20,000 leagues under the sea. Keep your eye out for the sea monster though.

A super fun, and frankly beautifully designed attraction is the Orbitron. It was inspired by Da Vinci’s drawings of the solar system and has constellations carved around it too. Sit in a rocket and use the lever to decide at what height you want to be. Ride this at night for an amazing illuminated view of Discoveryland.

Space Mountain has been re-themed to be Star Wars related – Hyperspace Mountain – , so the outside reflects the original steam punk futuristic style, where the riders are shot out of a kind of a canon at the start (see photo above), whereas the ride itself is very much modern sci-fi. Evade blaster fire and TIE fighters to help the Rebel Alliance defeat the Empire all while listening to the soundtrack and hurtling through the dark! If you fancy more Star Wars you can definitely meet Darth Vader, like I did, and then ride Star Tours.

Once you’ve done all of this, don’t forget to find everyones favourite Space Ranger; Buzz Lightyear. Join him in firing lasers, defeating Emperor Zorg and becoming a Galactic Hero. I’m much more of a fan of Toy Story Mania, but this ride is always great fun to do! 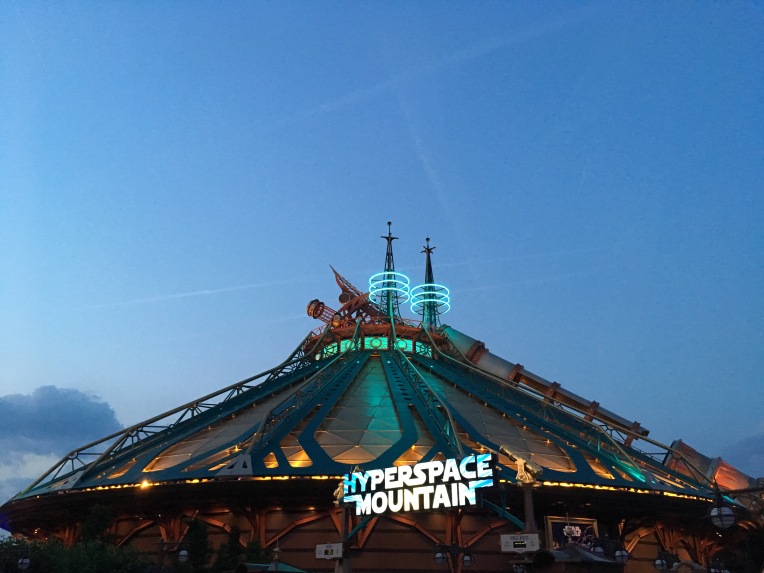 The ‘Disney Stars on Parade’ route runs from the edge of Fantasyland, past the castle, and then down Main Street to Town Square. It’s packed full of all your favourite Disney and Pixar characters like Tangled, Frozen, Toy Story, Sleeping Beauty and Finding Nemo. Plus, Maleficent as the dragon, which breathes real fire. It’s such good fun to watch!

I wish I had taken more pictures of the parade, but we had a terrible position, which made it so hard to get good angles – hello tree branches in my lens….

I can’t complain though, because at the end of the parade the castle in front of us looked gloriously pink in the setting sun.

Don’t forget to stay for the castle show and fireworks. I love it, because here in Paris everyone at the front by the castle sits down on the ground to watch the show, so you can always see. The castle is lit up with projections from the different Disney films while fireworks go off at the perfect moments. There’s even a Star Wars section, which is always a little explosive! I’m not going to lie, I definitely cried during the show, so it’s definitely worth the wait to see it and I’m so glad I did.

I hope you enjoyed our little wander through the park and hopefully I’ll ‘see you real soon’!

One thought on “Exploring Disneyland Park in Paris”

🎠 The Disney parks around the world will have all finally reopened by this time next month. I’ve been watching the The Imagineering Story documentary on Disney+ about the history and creation of the parks, technology and rides (highly, highly recommend), waiting patiently(ish) until I can visit WDW again for the 50th Anniversary celebrations!! 🐭✨
🌿 Happy Bank Holiday weekend! I’m missing the gorgeous bougainvillea in our garden in Lima at the moment, but the apple blossom is coming out on our trees here in England and it’s looking so beautiful. I hope you all enjoy whatever garden parties/gatherings you have planned tomorrow! 🌸
🌿Happy Earth Day! The world is such a beautiful place, full of wonder and magic, so let’s make sure it stays that way. Not only for us, but for everyone who comes after us too 🌱
My favourite kind of treat, whatever the weather! @gelatojack is one of my favourite places to go when I’m need of a pick me up. Where’s your ‘go to’ local foodie spot?🍦
🐰🌸Happy Easter! I plan to eat a lot of chocolate today and enjoy some garden socialising in the sunshine. I’ll also be scoffing these mini German Chocolate style cupcakes too - don’t you think the topping is just perfect to make a little nest for a mini egg! I’ll hopefully have the recipe up later today.... and they’re even gluten-free!!
🇬🇧 What a perfect spot to enjoy the spring sunshine....
🇵🇪 Missing my Peruvian family so much and it’s been way longer than any of us thought it would be. Roll on international travel in May!! I’m also missing the little princess of the house, who always keeps me company when I’m home alone - hopefully 2021 will reunite us all! 🐶 🌿
🌼 Springtime @wimpole_estate_nt means daffodils galore and these frilly, peachy ones were definitely one of my favourites! @nationaltrust @eastofenglandnt 🌿
Who’s looking forward to getting back into the garden with a few friends or family from Monday? Whatever the weather, I think outdoor dining is going to surge here in England!! I love a garden party, even if it’s a mini one - this one was from Lockdown 1 when I was still in Lima and we had a little garden party just for us 🌿🍰
%d bloggers like this: