If you’ve been reading for a while, then you know how much of a huge fangirl I am of Harry Potter. I have been ever since I was at school and I still am now. In fact, if anything, I love it more than ever.

It literally fills me with joy when I get to experience something that was part of the books and/or films or the inspiration behind it, so imagine how I felt getting to visit an immersive replica of Diagon Alley, complete with shops, The Leaky Cauldron and a giant fire breathing dragon.

I had visited The Wizarding World of Harry Potter at Universal Orlando before, but only the section with Hogsmeade and Hogwarts Castle. Diagon Alley and ‘London’ were all new to me, and I had been dying to visit since it opened a few years ago. This month I had the opportunity to go back to Florida for a week and I jumped at the chance to head to Universal for the day.

To be able to see both parts of the Wizarding World you need to be able to visit both theme parks within the Universal Resort. Diagon Alley is located in Universal Studios and Hogsmeade/Hogwarts is in Islands of Adventure. I only had one day to spare so I went for the 1 day park-to-park ticket which allowed me to jump between both parks as many times as I wanted during the day. This was perfect, and instead of walking between the parks every time, I hopped onto the Hogwarts Express to make the journey between London Kings Cross (eerily similar to our station back home) in Universal Studios and Hogsmeade in IOA, which is just how the characters would have done it in the books.

But enough with the logistics, you came here for Diagon Alley (and London) and Diagon Alley you shall get! But first you’ll come across parts of London and the Knight Bus before you can enter. 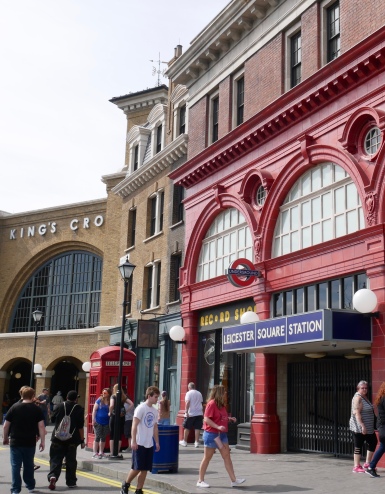 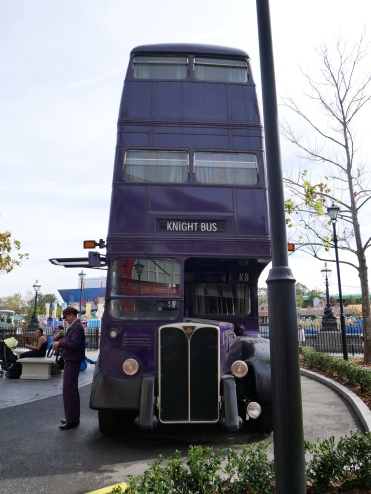 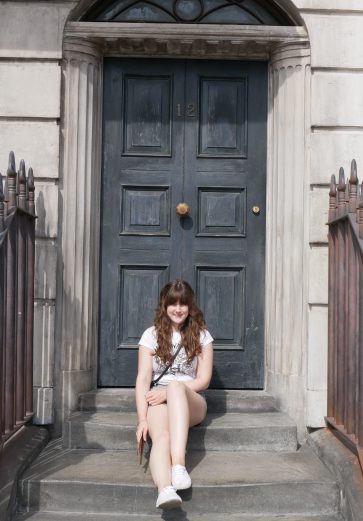 You can chat with Stan Shunpike, the conductor, and the shrunken head that hangs at the front of the bus, but sadly Ernie isn’t driving at the moment.

Seeing a replica of London in the United States was pretty strange, especially considering you had Kings Cross, Leicester Square and Islington are all right next to each other in the same section of street. Geography aside, the attention to detail was insane. The brickwork of Kings Cross was very familiar, the tube entrance was spot on and even the signposts made me feel at home!

Grimmauld Place, located in the Borough of Islington, is very grand and number 12 (Sirius Black’s family home and headquarters of the Order of the Pheonix) isn’t currently hidden so you don’t need Mad-Eye Moody to find it! If you look very closely you can even see the Black’s house elf Kreacher peeking out from behind the curtains in various windows.

In the middle of London you’ll see an unassuming brick wall. Head around the side and you’ll see a gap made in the bricks that takes you through to Diagon Alley. 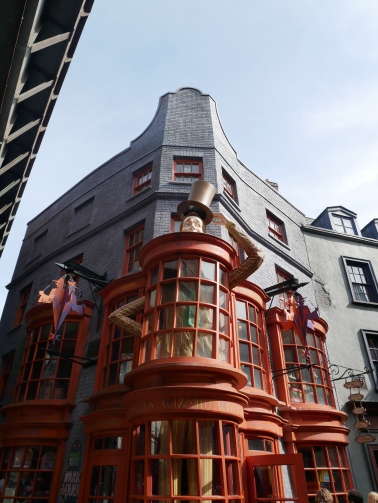 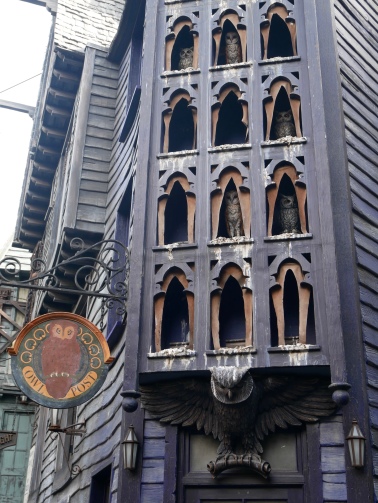 There’s an actual dragon you guys, atop of Gringotts Bank – a figure you may remember from The Deathly Hallows – and he breathes real fire. No joke. It happens every so often so you’ll definitely get to witness it, just listen for the growling rumble and the fire will shortly follow. It’s such a spectacle.

There is so much to do here, including the Escape from Gringotts ride inside the bank. It’s part track ride and part 3-D experience, and it’s fabulous! I would have liked it to be longer, but nonetheless an incredible immersive experience.

There are shows to watch that include stories from Beedle the Bard re-enacted with puppets and Molly Weasley’s favourite singer Celestina Warbeck performing her hit singles!

You can pick up an interactive wand from Olivanders (either choose one in the shop or meet with Olivander and have the wand choose you…) and use it in both Harry Potter locations to cast spells on different windows and objects around the areas. The wand comes with a map so you don’t miss one! You can make trolls dance, rain fall from umbrellas, objects float or even fix themselves, and use familiar spells such as ‘Wingardium Leviosa’ and ‘Alohamora’. My boyfriend and I had so much fun with my wand (Hermione’s of course – she’s a boss) and when the spells work you genuinely feel so proud of yourself! It’s definitely an activity for both children and adults alike.

You can explore a number of different shops that will be familiar to you, including Weasley’s Wizard Wheezes, Madam Malkin’s Robes (you can even buy Hermione’s pink Yule Ball dress here), Quality Quidditch Supplies, Sugarplum’s Sweet Shop, and Wiseacre’s Wizarding Equipment (at the end of the Gringotts ride). Some you can’t enter like the Magical Menagerie, but the window displays are always fascinating and hold a surprise or two. 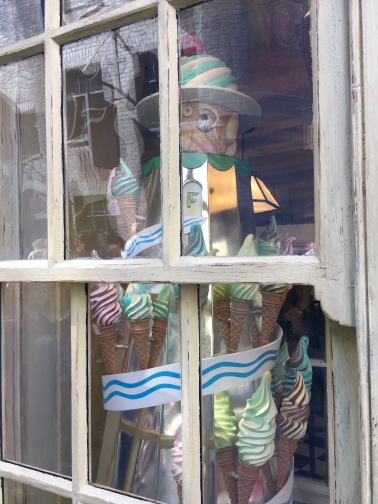 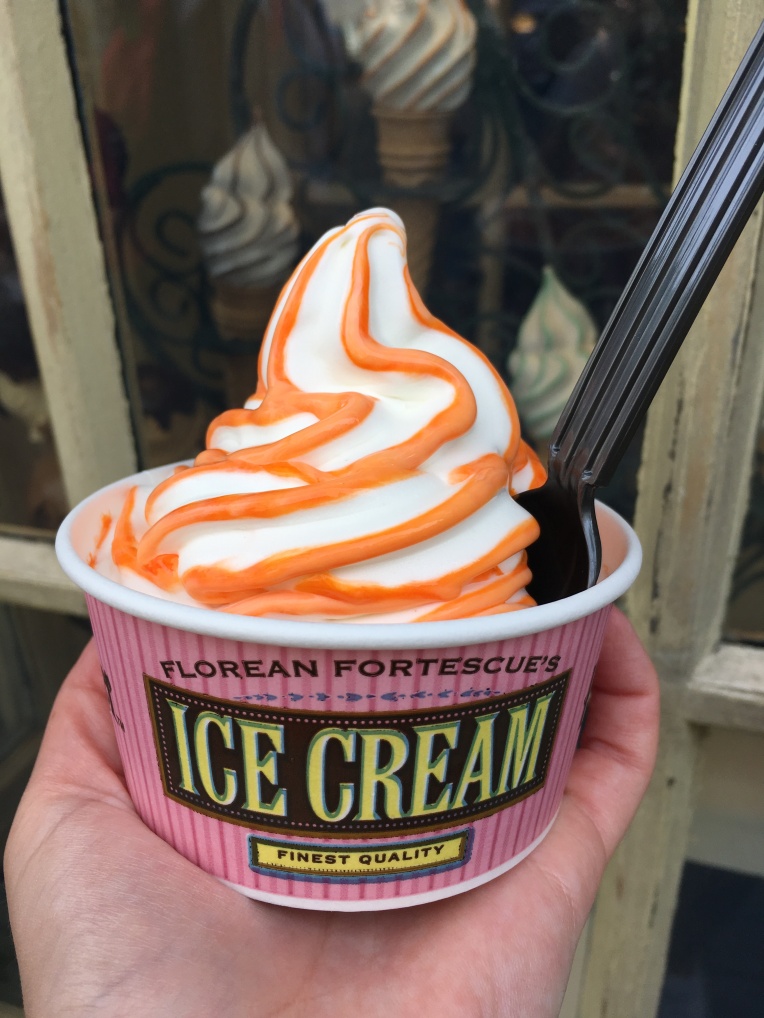 There are a couple of locations to buy Butterbeer – including The Hopping Pot – and you can purchase it in regular, hot or frozen, depending on your preference, although I don’t know if the latter two are seasonal or not. You can also try butterbeer  ice cream in Florean Fortescue’s, but there are a number of other interesting flavours if that doesn’t tickle your fancy. They even have soft serve options and the orange marmalade version was a winner for me…

For lunch, I highly recommend checking out The Leaky Cauldron pub. It’s by far the best value for money in the park and the quality is high. We opted for the Ploughman’s (what English person doesn’t love a ploughman’s, am I right?!) which was actually huge, but we saw the other dishes floating around (not literally) and they all looked delicious, especially the Bangers and Mash (sausage and mashed potato). If you’re not familiar with a ploughman’s, it’s basically slices of cheese served with bread, and has additional items like egg, pickles, salad and sauces. You may think it strange to be eating English food when on holiday, but honestly I would much prefer it to a standard overpriced burger or hot dog any day! Plus, it completely made me feel like I was in The Leaky Cauldron in England and, for me, that’s the whole point.

The darker side to this area is obviously Knockturn Alley, the place where dark magic can be found. There are spaces for spells in here too, like making a bird swell up and a chimney sweep climb a ladder, as well as the infamous Borgin and Burke’s. It’s very dark in here and a complete contrast to the bright colours and strong sunlight of Diagon Alley. Spooky! 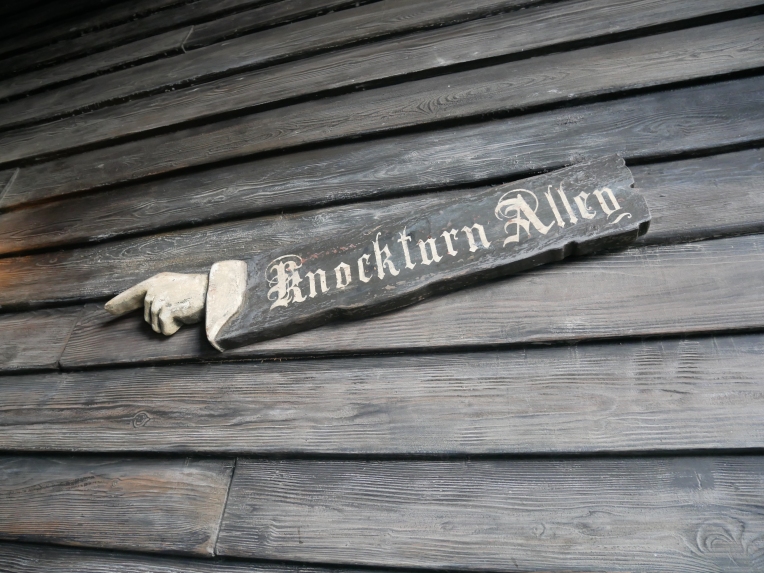 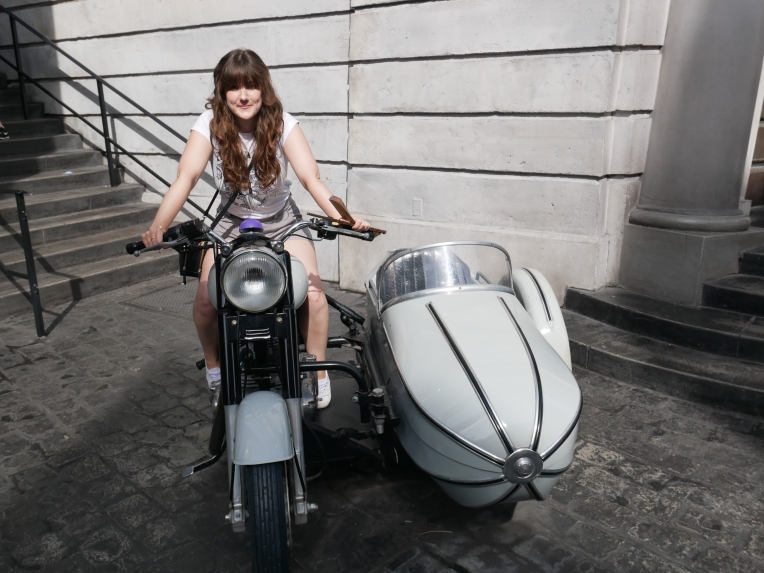 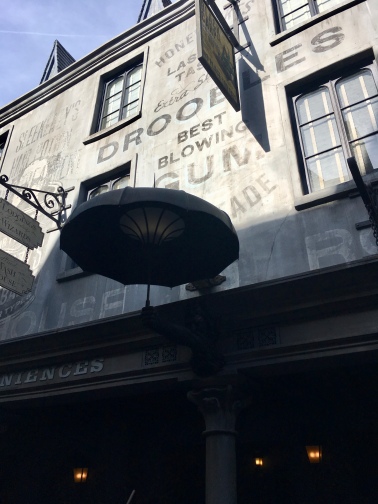 I honestly can’t tell you how much I loved spending time in Diagon Alley. It’s so enclosed that you really feel as though you’re somewhere else entirely away from Universal Studios. When we first arrived there weren’t many people and it was a surreal experience to be actually standing in Diagon Alley with only a few people wandering around. I had a blast casting spells, trying on robes, eating wizard food, and exploring all the details in every nook and corner. I feel like I could go back another ten times and still find new things that I hadn’t noticed before. I loved every second of it.

If you’ve never read the books or seen the films, this are has so much to offer that it won’t matter. A friend of mine hadn’t and she fell in love with it so much when she visited that she binged all the films as soon as she came home!

If you loved seeing the Wizarding World in Diagon Alley, then you’ll have to come back on Thursday, as I still have to share Hogsmeade and Hogwarts Castle with you. I couldn’t possibly fit all the photos into the same post without making it ridiculously long, so let’s jump on the Hogwarts Express, sit back in our compartment and watch the countryside, and maybe a dementor or two, fly by. 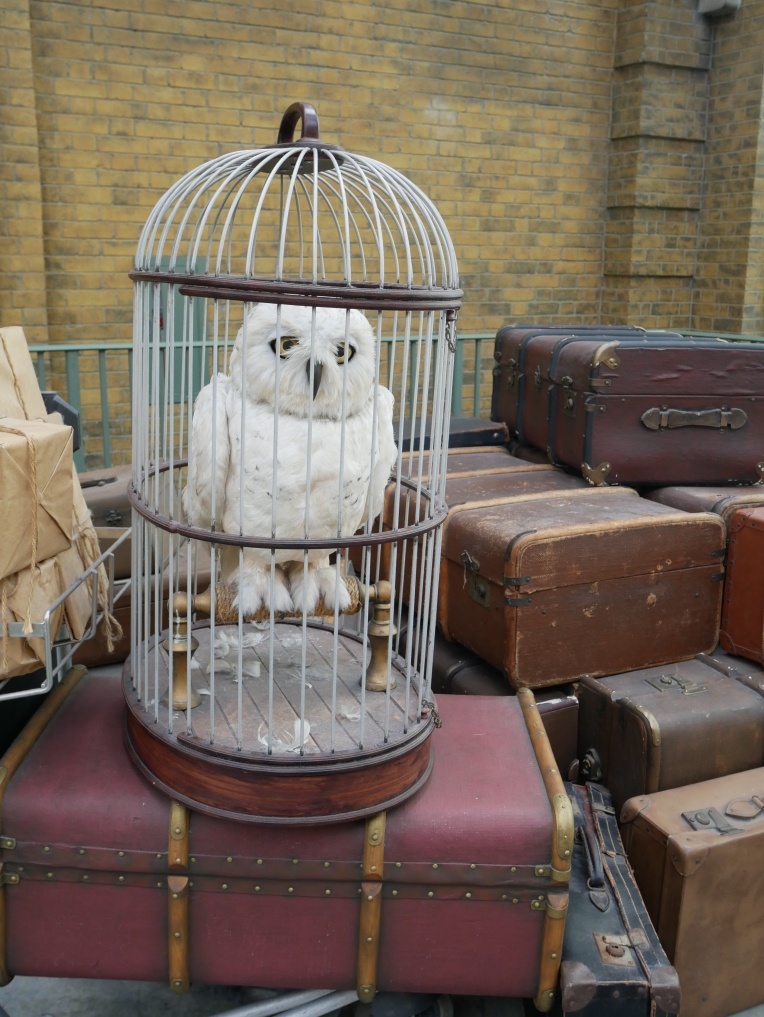 💌 No post on Sunday eh?
🎃Happy Halloween!
🐆✨When the Wizarding World meets the natural world…
🌿One of the highlights of my summer this year was spending over a week in Cornwall house sitting for my godmother and taking care of her menagerie of animals! It’s honestly one of the most beautiful counties in England and I’m trying to get down every year now, if I can. Everyone heads for the coast but inland has a different kind of lush, green beauty - perfect for dog walks (swipe to the end to see a very happy pup in the stream!)🐶
💍 7.8.2021 // Exactly 2 months ago, two of my favourite people finally got married - my brother @physical_blueprint and his wife @anni.jenkins! It was such a wonderful day and I was even able to celebrate alongside my other half, who’d finally arrived in the U.K.. I can’t wait for the big celebration next year without a restriction in sight, but for now I’m so happy they were able to tie the knot! ✨ (I know it’s taken an age, but I’m terrible at sorting and editing my photos quickly….and posting 🤦‍♀️)
I’ve been fully soaking up life the last few months having finally been reunited with my other half (border closures suck) and moved temporarily to another country. So, before I cover my feed with photos from Italy and autumn truly takes over I’m going to share a few of my fave summer memories. Obviously going to new (to me) places to eat is a favourite hobby of mine and I finally got to visit @aromebakerylondon and try their delicious pastries. If you go make sure to grab their bacon miso escargot (warmed up) as well as something sweet for later!
🎠 The Disney parks around the world will have all finally reopened by this time next month. I’ve been watching the The Imagineering Story documentary on Disney+ about the history and creation of the parks, technology and rides (highly, highly recommend), waiting patiently(ish) until I can visit WDW again for the 50th Anniversary celebrations!! 🐭✨
🌿 Happy Bank Holiday weekend! I’m missing the gorgeous bougainvillea in our garden in Lima at the moment, but the apple blossom is coming out on our trees here in England and it’s looking so beautiful. I hope you all enjoy whatever garden parties/gatherings you have planned tomorrow! 🌸
🌿Happy Earth Day! The world is such a beautiful place, full of wonder and magic, so let’s make sure it stays that way. Not only for us, but for everyone who comes after us too 🌱
%d bloggers like this: