Welcome to my first post for ‘A Slice of Christmas’, a seasonal selection of posts for December and the run up to Christmas. I’m super excited to be doing some festive posts this year as the last couple of years I’ve taken some time during December to enjoy time with my family in the UK. However, this year I’ll actually be in Peru for the majority of the holiday period!

One of my favourite things to do throughout December, is to watch a huge variety of Christmassy films. I love to get warm on the sofa with a hot chocolate (although this really is not needed in Lima with its 25C weather) and a mountain of snacks, and enjoy the magic! This makes me feel extra festive, and to get you all into the Christmas spirit too I am going to share with you my top 10 Christmas films (in no particular order), along with a little taster of each one, so you can pick the perfect ones to watch.

Kevin is accidentally left behind by his family when they go away for Christmas. Burglars try to rob his house and hilarity ensues!

This is such a quintessential Christmas film, and I’m sure it’s in most people’s ‘best of’ lists. Kevin is extremely creative in the ways he goes about foiling the burglars and it’s so fun to see how he survives in the house alone.

Buddy the Elf finds out that he’s a human, and not actually an elf, and goes to find his real father in New York City after having spent his whole life at the North Pole. Will it be everything he hoped for?

“Son of a nutcracker”. For me, this is one of Will Ferrel’s best roles. Buddy’s childlike innocence and love for everything is infectious and you just want everyone to be a little more like him! This has become a must watch film since it was released, and it doesn’t really feel like Christmas without watching it.

Scott Calvin is a bit of a humbug and has a bad relationship with his young son until an accident changes his life and he is forced to become Santa Claus.

Tim Allen is super funny in this film and I also love David Krumholtz as the head elf. A genuine feel-good family film.

THE NIGHTMARE BEFORE CHRISTMAS

Tim Burton’s musical masterpiece is about Jack Skellington, the star of Halloween Town. However, he feels that something is missing from his life and he can’t figure out what, until he accidentally stumbles upon Christmas Town…..

This is both a Halloween and a Christmas film and therefore unlike any other Christmas film out there! This is Tim Burton’s vision brought spectacularly to life by Henry Selick, and as you can imagine there are a few crazy characters and the film is just so beautifully shot. It has a great storyline along with some fantastic songs like ‘What’s This?’ and ‘Oogie Boogie’s Song’. An alternative Christmas film!

Based on Dr Suess’ book of the same name. The Grinch is an outcast living at the top of the mountain looking over Whoville. He decides that he wants to ruin their Christmas because he hates it and heads down into the town to steal all of their Christmas items, including presents, trees and food!

An ideal role for Jim Carrey, who embodies the Grinch so well. It really reminds me of his days as The Mask (and not just because they’re both green!), as he yet again shows how well he can over exaggerate his movements and over stretch his facial expressions. As with all Dr Suess’ books, I feel like this film also teaches us something; that Christmas is more than just presents and commercialisation, and we should never judge people at first glance. A super fun film with a heartwarming message, what more could you ask for from a Christmas flick!

I love this movie so much. It’s a great retelling of a Christmas classic and the Muppets do it so well. They inject some humour into the otherwise slightly ominous tale of Ebenezer Scrooge and his disdain for everything and everyone.

CHRISTMAS WITH THE KRANKS

When their daughter will be in South America over Christmas, Nora and Luther Krank decide to skip Christmas and go on a cruise instead, much to their neighbours’ dismay! Could this prove to be the wrong decision?

This is an unpopular choice as so many people absolutely hate this film. Honestly, I think it’s good fun, if at times a little too goofy for me. I discovered it for the first time a couple of years ago and I’ve enjoyed watching it every year since. Plus, the daughter in the film goes to Peru and comes back with a Peruvian boyfriend! I’m sure I’ve heard that happening somewhere before…..oh wait…that would be me!

Set in a POW camp in WW2, we follow a group of allied prisoners trying to break out from their German controlled camp.

Not so Christmassy in topic, but this film used to be shown on Boxing Day (the 26th Dec) every year, so it’s a film I always associate with Christmas time. There is a fabulous all-star cast that includes Richard Attenborough, Steve McQueen and James Garner. At some point I owned it on VHS, plus I had a massive poster of Steve McQueen in the motorbike scene on my door. Highly recommended as a non-Christmassy Christmas film!

When terrorists hijack the building of his wife’s office during their Christmas party, John McClain (an NYPD cop) goes to extreme lengths to protect his wife and bring down the bad guys.

This is one of my all time favourite movies and honestly Christmas doesn’t really start until you’ve seen it. It’s like a law with my brother and me! I bit of action, Bruce Willis saving the day, Alan Rickman as a baddie, and some Christmas tunes make this film such a winner. Plus Al the LAPD cop who loves Twinkies is pretty awesome!

A selection of Londoners’ stories are intertwined in the run up to Christmas and they all revolve around one thing; love. It’s funny, heart warming, and really very British! Alan Rickman, Hugh Grant, Emma Thompson, Colin Firth and Andrew Lincoln head up an all star cast in this classic Christmas movie. My favourite thing about it is Bill Nighy who plays an ageing rockstar releasing a Christmas single. Just brilliant.

This one I was obsessed with it when it first came out and I do still love so many parts of it. It really is quintessentially British, full of fabulous, well-known actors and some golden comedy scenes, but maybe I’ve over-watched it, as it doesn’t hold the same draw for me as much as it used to. I wanted to share it with you though, so that you can make it a new favourite of yours. 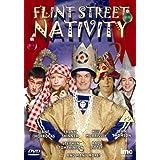 This one is a bonus because I don’t think it would be classed as a film, but more like a TV special. I can’t find a decent clip of it online but click on the photo to the left and you can purchase the DVD on Amazon!

It’s jam packed full of great British TV actors, and it’s based around a school nativity play. Adults play children as we see what goes on between the ‘children’ during the night of their big Christmas performance and how their issues affect the production. It is super hilarious and has some of my favourite all time scenes and lines in. Go on, “dares ya”!

I hope you find something in this list that you want to watch this Christmas and enjoy a festive movie marathon while scoffing mince pies or panetón…mmmmm.

Follow the blog and you can be the first to know about any new seasonal posts during December!

2022, you started so badly but you ended so brilliantly. After leaving Lima and moving home to the U.K., I tried to say yes to almost every opportunity that came my way and had the most amazing experiences for it. So, so excited for 2023…
🎄Christmas in Hogsmeade….
✨🎄 Duel of the Christmas jumpers, duel of the fandoms, and duel of the parks.
🌲Time for a winter walk!
💥 MCM photo dump!
⚡️MCM Comic Con London Highlights!
4 weeks of being an auntie to this little bundle of cuteness 🥰 Amazing work @anni.jenkins and @physical_blueprint - he’s gorgeous ✨
"When life seems hard, the courageous do not lie down and accept defeat; instead, they are all the more determined to struggle for a better future."
BEST. DAY. EVER
%d bloggers like this: